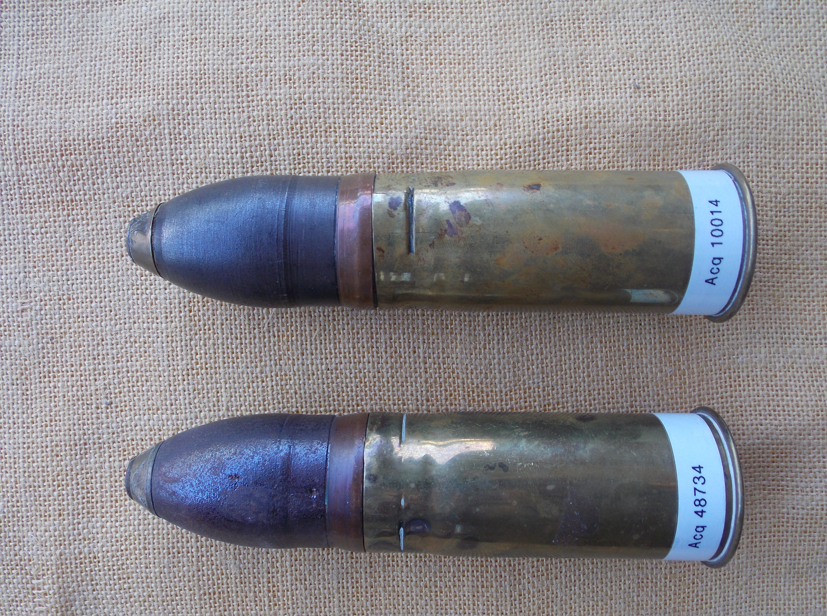 The DITSONG: National Museum of Military History has in its ammunition collection over 50 rounds of 37mm Vickers / Maxim / Pom/Pom / 1Pr ammunition from Boer, British and German origin. The ammunition was manufactured for the Boer War (1899-1902), the 1904 Herero uprising in German South West Africa (Namibia) and ammunition from the First World War (1914-1918). This article covers some of the aspects of the ZAR acquisition and use of this ammunition.

Various publications on the Anglo-Boer War mention that the Boers either had 22 or 25 of the 37mm Maxim-Nordenfelt (Pom-pom) guns. The most appropriate number is 25 guns. The guns were purchased from the Maxim Nordenfelt Gun and Ammunition Company Limited (UK), Vickers, Sons and Maxim (UK) or from Krupp (Germany). Each came with a limber, ammunition boxes and ammunition belts. Each belt held 25 rounds and each limber, 16 belts, totalling 400 rounds carried per gun. There is photographic evidence of the Boers using standard canvas ammunition belts of 4 inches (101mm) in width.

According to statistics acquired after the war, the Boer Republics had obtained 72 000 rounds of Pom-pom ammunition before the war, some of which had been expended prior to the outbreak of the war. Thus, each gun would have had about 3 000 rounds.

The Boers also made their own ammunition. In 1894 the Zuid-Afrikaansche Fabrieken voor Ontplofbare Stoffen Beperkt (Z.A.F.O.S) was awarded the sole rights from the Zuid-Afrikaansche Republiek (ZAR or Transvaal Republic) for the manufacture and sale of dynamite and ammunition. This company took over the powder factory at Baviaanspoort (north-east of Pretoria) and also erected a factory at Modderfontein (eastern Johannesburg), capable of manufacturing 40 000 boxes of dynamite per year, in 1896.

The Machine Shops and Electro-Technical Works of Delfos Bros & Co had two shops, one in Arcadia and one in Andries Street, Pretoria. They received much sub-contracting work from Z.A.F.O.S. to produce fuses for artillery projectiles and to reload and manufacture cartridges. The Museum has two rounds, which are marked Delfos, Pretoria on their fuses.

The Begbie engineering works (a British company) in Johannesburg was commandeered by the Boers who employed Italian and French workmen who turned it into an arsenal. Amongst others, they made 12 000 rounds for the Krupp 75mm Quick Firing guns and nearly 5 000 copied rounds of the captured British 12 and 15 pounder ammunition. Only about 6 000 rounds for the Pom-poms were made by the Boers, most apparently at the Begbie factory but some at Delfos in Pretoria. This shows that the Boers had sufficient Pom-pom ammunition at the time.

When the Boers were taken over by the British forces in Bloemfontein, Johannesburg and Pretoria, the Boers abandoned much of their ammunition. However, quantities of ammunition were still available to the Boers when they entered the guerrilla phase of the war. The guerrilla tactics of ‘hit and run’ enabled the Boers to use captured British Pom-poms and ammunition against their enemies.