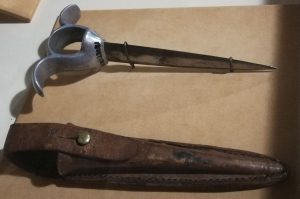 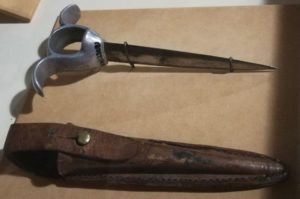 A push dagger is a small dagger designed for thrusting while held in a clenched fist. The handle is usually perpendicular to the blade and held inside a fist with the small blade protruding between the fingers. The push dagger is therefore easy to conceal and when witnessing a person attacking with a push dagger it can appear that they are merely attempting to punch somebody. Push daggers are therefore illegal in many parts of the world. The technicality often used in law codes involves banning any small blade with a perpendicular handle. The earliest push dagger of standardised design was an Indian weapon called a katar and dates back to the 16th Century.

Trench warfare in the First World War created a new need for push daggers. Soldiers were expected to manage hand to hand combat in confined and muddy spaces. The simple reliability of a push dagger was ideal and functional in the tightest of spaces.

Initially soldiers were creating makeshift weapons on the front lines, and military production would eventually start producing adequate numbers of service issue weapons. In the meantime, private companies took advantage of the demand and began producing wide varieties of personal weapons that could be useful in trench warfare. One such company was Robbins of Dudley, in Worcestershire. The company was originally a basic blacksmith ironworking business but became known for their production of a wide variety of First World War daggers. Regarding push daggers specifically, Robbins of Dudley is believed to be the first company to commercially produce push daggers or punch daggers.

The push dagger displayed in the Adler Hall of the Ditsong National Museum of Military History is a Robbins push dagger which once belonged to a survivor of the Battle of Delville Wood in July 1916, Lance Corporal Leslie Arnold.