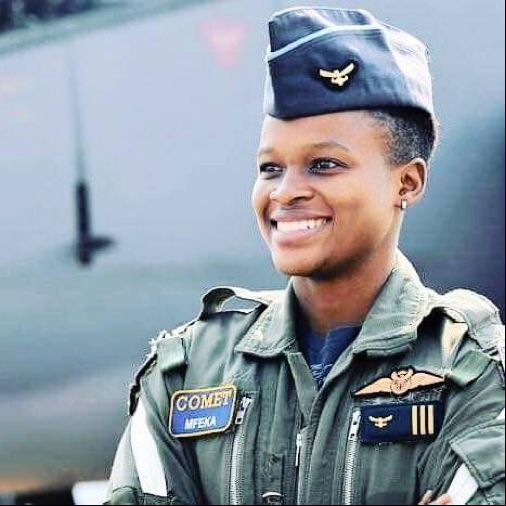 The DITSONG National Museum of Military History was delighted to have Major Mandisa Mfeka as a guest on 1 August 2019. Maj Mfeka has the distinction of being the first black female to qualify as a fighter pilot in the South African Air Force (SAAF) and she was the subject of a television advert being filmed at the Museum on that day for Women’s Month. 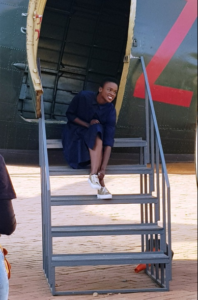 Maj Mfeka grew up in KwaZulu-Natal, where, from an early age her mother and grandmother would take her on regular trips to see the air shows at Virginia Airport in Durban. The aircraft flying overhead fascinated her and stimulated her interest in flying. At the age of sixteen she came across a recruitment advertisement produced by the SAAF. While reading it she saw that she had the requirements necessary to be a combat pilot and did not hesitate to enrol after leaving school in 2008.

Her training was challenging and Mfeka admits that it was both physically and emotionally demanding. Her determination carried her through it and in 2011 she achieved her number one aim of earning the SAAF pilot’s wings. Once she had graduated on the Pilatus PC-7 Trainer she transferred to 85 Combat Flying School at Air Force Base Makado in Limpopo, where she currently serves on the BAE Hawk Mk 120 Lead-In Flight Trainer.

A major milestone in Mfeka’s career occurred on 25 May 2019 when she formed part of the Hawks Formation Display Team which took part in the inauguration of President Cyril Ramaphosa at Loftus Versfeldt in Pretoria. Maj Mfeka is quoted as stating that being a combat pilot is mentally stimulating. Her technical expertise is growing day by day and she is also learning more about aerodynamics. She lives by the saying, “The sky is the baseline”. This effectively means that the excellence bar pushed yesterday should be the starting point for tomorrow.

Figure 1: Maj Mandisa Mfeka sitting on the steps leading up to the Douglas C 47 Dakota at the Museum.