Edged weapons were being developed in the form of handheld sharpened stones since long before we evolved into homo sapiens, but some of the prey they wanted to hunt was too fast, to wary of them, or too dangerous, and so our prehistoric ancestors innovated ways to increase the reach of their weapons by securing the sharpened stones to the end of sticks creating the first spears. As they adapted their weapons to the defences of their targets they also adapted their tactics and skills, surrounding prey, and throwing spears.

In the 21st Century variations on the spear are still being used in combat by the most advanced militaries in the world. Bayonets attached to the end of rifles have been used to break out of ambushes by the Royal Marines and United States Marines in Iraq and Afghanistan.

Bayonets on the ends of rifles are simply spears with removable heads. Sword bayonets were popular when swords were still a common weapon of war, and as knives and daggers have taken precedence over swords, knife bayonets have become the standard. Some currently used bayonets are serrated for utility purposes like the AK47 bayonet which can also be used as wire cutters. 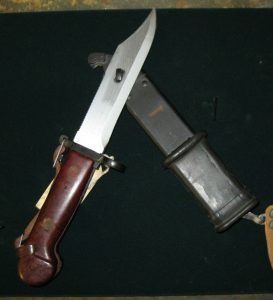 A creative form of innovation in edged weapons has been the attachment of a frightening reputation to the weapon. Saw-back bayonets are believed to elicit more fear in an enemy than smooth backed bayonets even though the effect of the weapon in battle is much the same. Gurkha Kukri knives were famed for their ability to disembowel a horse with one blow and stories spread through the First World War of Gurkha soldiers slipping into enemy trenches at night and quietly slitting throats. Various edged weapons have been said to contain the spirits of the people they have killed, and Hindu Kris daggers are sometimes believed to be spirits themselves. Superstitions spread the belief that a kukri can kill a person by simply being pointed at them.

Even with rifles having long since become dominant as the primary weapon on battlefields, far more fear has been attached to shanks, machetes, or British cold steel.