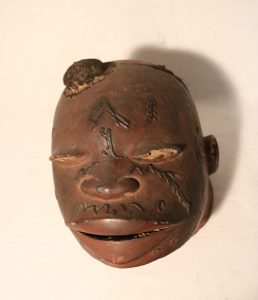 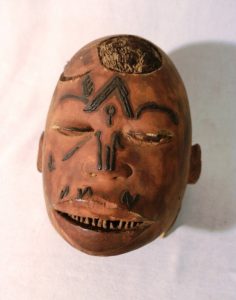 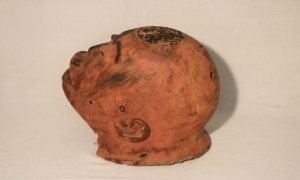 The Mapiko masks are associated with the Makonde people of Mozambique and two were donated to the Department of Ethnology (of the former Transvaal Museum) by Mrs W. Parker in June 1944. The masks were collected in Cabo Delgado, the northernmost province in Mozambique.

Although the museum masks were collected in Mozambique, it is worth noting that Makonde people also live in Tanzania. The two groups live on the Makonde plateau, but are geographically separated by the Rovuma River and are different socially, in culture and language. Although the masks were donated to the museum while it was still called Transvaal Museum they are currently part of the Anthropological Collection of the Ditsong National Museum of Cultural History (Pretoria).

Makonde masks had two form types: either as a face mask or a helmet. Generally, the face mask covers the face only, is carved in vertical plane and is attached to the head or headdress, by strings passing through holes located along the periphery of the object. Lip plugs may or may not be present, and the eyes and mouth are normally perforated. The mask displayed here, is made out of light wood, probably nyala wood, but the wood has matured and is now medium to dark brown, presumably from long exposure to light and oxidation. Strips of black beeswax were usually added to the face to represent and accentuate scarification.

A circular indented portion, above the forehead contains a textured black coloured area, resembling stained hair. The mask is worn over the head, tilted slightly backward allowing the wearer to see through the perforated sections for the eyes and teeth (sharpened according to the practice at the time).

Precolonial Makonde sculptors are known for these masks and they are regarded as the most important carved objects associated with initiation ceremonies. They are worn during the Mapiko initiation dance ritual. Each dancer represents a spirit. A member of the men’s secret society would carve the mask and one of the members of this society wear and dance in it during a ceremony held for new initiates. The dancer would masquerade as the spirit of a deceased person. Only the initiated men knew that the dancer was a living member of the community.

The ‘traditional’ carved objects of the Makonde people have mostly been restricted to Mapiko masks. After World War II (1939-1945) new carved objects started to appear as more carvers devoted their time to carving. Due to the demand for ritual objects by Portuguese colonialists, the carvers developed commercial versions of Mapiko masks. Unlike the earlier masks, this mask was not as elaborately decorated, as the scarification was not carefully applied by using beeswax, but created by incisions into the wood. Although the Makonde masks are well-known, little is known about the social and economic contexts in which they are manufactured. 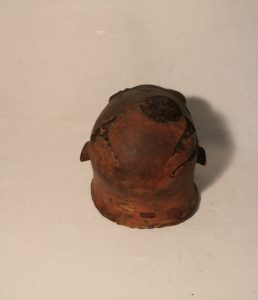 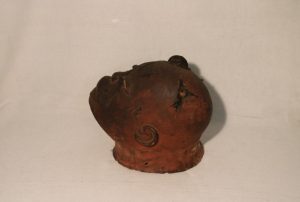