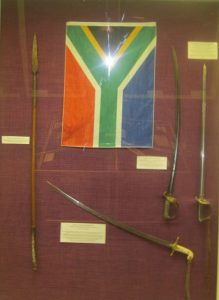 The Battle of Blood/Ncome River (16 December 1838) is included as a part of the 16 December South African national holiday, the Day of Reconciliation. The anniversary of the battle was included into the new South African calendar specifically because it had a long history of being a severely emotional day of remembrance for Afrikaans South Africans. One perspective on the battle is that its commemoration can be used to suggest white supremacy ordained by god, and so the day was combined with the commemoration of the 16 December 1961 founding of Umkhonto we Sizwe (MK), the military wing of the African National Congress (ANC). This combination provided some balance but the two commemorations have also made strange bedfellows over the years. This is no coincidence as the 16 December date had long since developed into both annual commemorations of Afrikaner nationalism and annual opportunities to advance the struggle for universal South African liberty in a series of protest events against the Apartheid system. It is in the naming of the national holiday as a Day of Reconciliation that the expedient combination of these commemorations can be considered in a less divisive light.

In the edged weapons display at the Ditsong National Museum of Military History there is a window with the South African flag hanging in the centre. Four edged weapons surround the flag in what may be the most eclectic single display space in the museum. There is the ceremonial sword of Freddie Zeelie who was the first SADF soldier killed in the Border Wars (and was awarded the very rare Louw Weppener Decoration); there is a Natal Carbineers sword from the Battle of Isandlwana; there is the ceremonial sword of Lt Gen Sir Jacob van Deventer from the First World War; and there is a spear from the Battle of Blood/Ncome River. The display is inspired by symbolism in the national flag depicting the convergence of the histories of various South Africans into one shared story. 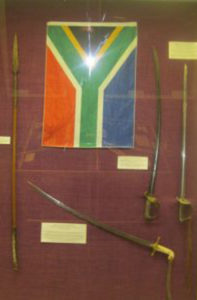 The display plays a role in promoting a united South African identity and is a stop along the tour route for school groups visiting the museum. The students are given permission to perceive all South African sides of any past conflict as a part of their own personal identity. Giving ownership of all South African history to each South African promotes empathy and unity in an attempt to replace the sometimes aggressive one-sided perspectives that South Africans habitually take in understanding their country’s past. The message is not that each side of each conflict was the good side, or that each side was the bad side, but rather to encourage the development of more complex perspectives about past events.

Regarding the example of The Battle of Blood/Ncome River, which was fought between Afrikaans and Zulu people, a tour guide who is neither Zulu nor Afrikaans can explain to the students that the desperate defence successfully mounted by the Afrikaans combatants is something they themselves can be proud of while simultaneously feeling the sorrow for the terrible losses suffered by the Zulu combatants. Also, both the Zulu and Afrikaans perspectives on the battle rightfully point out that the battle occurred at a time when the very existence of both cultures was under threat. The Afrikaans people were fleeing British rule while the Zulu people were responding to continued incursions of well-armed foreigners into territory which they had controlled.

This method of depicting the Battle of Blood/Ncome River places the event as an apt inclusion into South Africa’s national holiday on 16 December, the Day of Reconciliation.