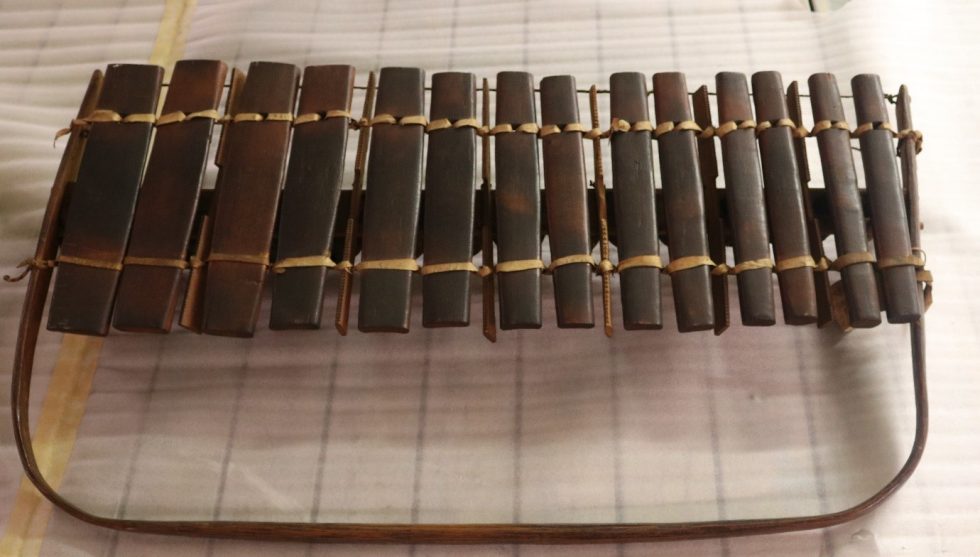 Mbilamutondo is an indigenous resonated xylophone played by VhaVenda people in the Limpopo Province in the northern part of South Africa. This musical instrument is a large wooden instrument with a light but strong frame used for carrying it. Mbilamutondo is usually comprised of ten – or at most twenty-two wooden slabs, each with a different key. Below each slab are cucumber shaped calabashes called mikumbu, each with an opening at the stalk end. They are fastened to the underpart of the frame to ensure that they remain firmly in position and aligned to the appropriate slab. The calabashes function as amplifiers to the sound made by slabs (Kirby, 1934: 56). The xylophones pictured in figures 1, 2 and 3 are part of the Anthropology Collection of the DITSONG: National Museum of Cultural History. These xylophones were collected in the 1920s in Sibasa, Venda.

Mbilamutondo is a compound name derived from two terms: mbila – the shape and form of the instrument which is made out of flat wooden keys, each bearing a gourd as resonator, and mutondo – the type of tree from which the mbila is made from which is also known for its medicinal value by VhaVenda people. The common name for this tree (Mutondo) is the Wild Teak tree, scientifically referred to as Pterocarpus angolensis. The Wild Teak tree has very strong wood and it is for that reason that most wooden tools used by VhaVenda are carved from it (Mugovhani, 2009:47- 52).

The construction of the mbilamutondo instrument in the past would take an expert at least a month to craft – at a high price too. Before a musical performance, the mbila is laid on the ground with the high pitched slabs to the right and the low pitched ones to the left. Two players would then squat behind the mbila. The right hand player, known as netshizwane, would hold a beater, referred to as tshiombo, in each hand. The beaters are each made from a thin stick of a Muonze tree, also known as Tamboti (Afrikaans name) and referred to as Spirostachys africana as its botanical nomenclature. Each beater has an oval rubber moulded as a head. The left hand player holds one beater with his right hand and two with his left, spreading them at a 90-degree angle. Netshizwane (the right hand player) would play a short melody that would be repeated throughout the piece, or a fixed tune which is usually a one-line melody or harmonized in two parts. Once the rhythm is established by the right hand player, the left hand player known as makwetane, begins his part with a contrasting melody, often varied in harmony and played with the right hand beater while adding a bass part with the left hand beaters (Kirby, 1934: 57). Although the two players perform on a single mbilamutondo instrument for most of the time, each player would sometimes also have their own instrument which they would play simultaneously. 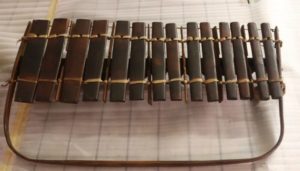 In the past, the mbilamutondo was played before battles or war, and served as accompaniment to the fierce songs which were sung to cheer the warriors on for battle. The instruments were mostly used in principal kraals for the entertainment of the chief and his friends. Mbilamutondo music is still widely performed in Zimbabwe, but as of 2003 there was a significant decline in the performance and promotion of mbilamutondo music. Only two practitioners could be identified around Venda: VhoRavele vha Makonde and VhoMunyai vha Pile. The former being the performer while the latter carved the instrument (Mugovhani, 2009: 46-51).