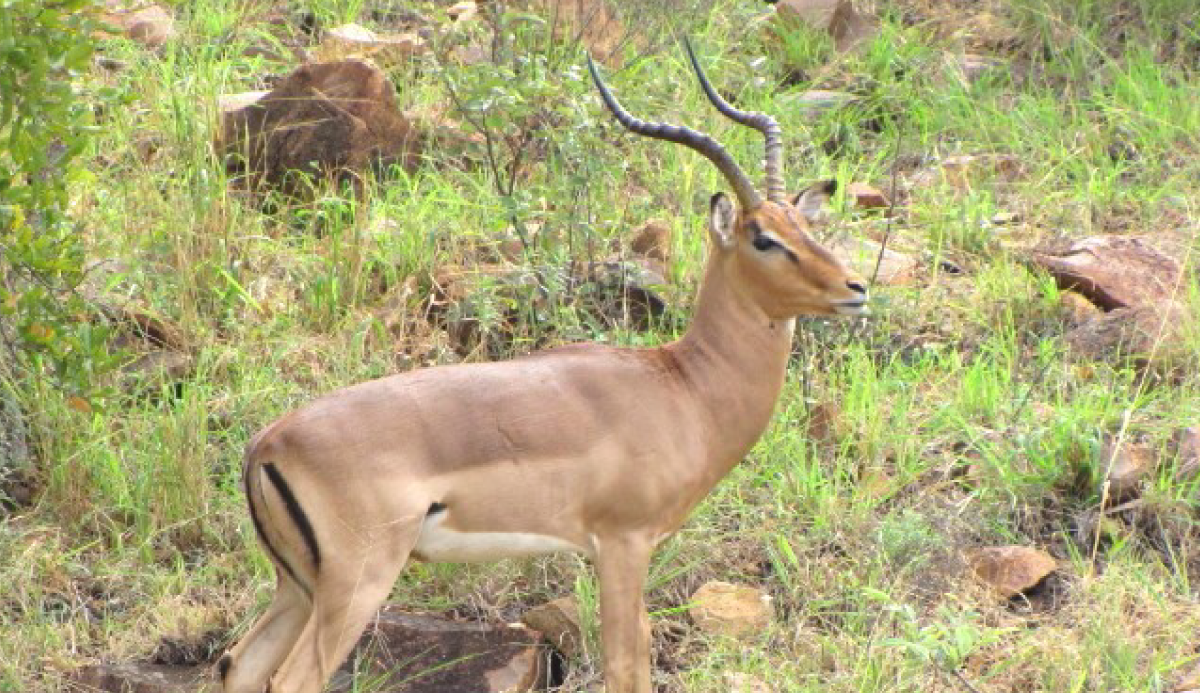 Throughout the history of the South African Air Force many of its aircraft have been given the names of African animals. The Atlas (Aermacchi) Impala trainer / close support aircraft is possibly one of the most well-known examples. This aircraft is named after southern Africa’s most common antelope, the Impala 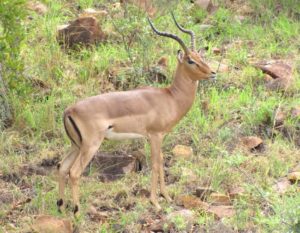 The impala (scientific name Aepyceros Melampus) is a medium size antelope common to eastern and southern Africa. It generally reaches a size of 900 m at the shoulders with the males weighing on average 60 kg while the females are lighter at around 40 kg. Only the males of this species grow horns.

The medium build of the impala allows it to be nimble and athletic in flight and it can jump to a height of 3 m and a distance of 12 m. This behaviour is suited to the indigenous bush environment as the antelope is able to leap over bushes and shrubs rather than having to navigate around them while escaping from predators. The impala also has a rocking horse gait which allows it to rock between its fore and rear limbs in a slower canter for the purposes of escape. This gait is indicative of the health of the impala as it rocks from side to side at speeds of up to 90 km.

The impala is equipped with excellent senses with large eyes providing exceptional vision and prominent ears that allow the animal to detect a wide range of sounds with ease. Like most antelope the impala has side-positioned eyes which provide an almost 180 degree peripheral vision when being pursued 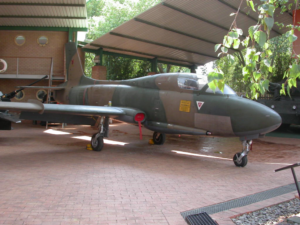 The South African Air Force Atlas Impala was developed locally from the Italian Aermacchi MB 326 trainer and became one of the most successful military aircraft of its type. Italian aircraft designer at Aermacchi, Ermanno Bazzochi, took a decision to design and produce a single-engine light fighter aircraft in 1954 due to the fact that Italy could not afford a supersonic interceptor or bomber at the time. The eventual design was robust, all-metal, simple and cheap to produce and fly. A well-equipped, pressurized tandem cockpit together with a low bubble canopy and an aerodynamic fuselage made the aircraft a perfect choice for jet flight training. Aermacchi soon established its supremacy in the development of jet trainers through this aircraft.

The Mk I version of the impala was produced as a two-seater, close support combat / trainer. Close air support is defined as air strikes against hostile targets in support of ground operations by both fixed-wing and rotary-winged aircraft.  Following its initial construction in Italy, local production of the Impala began at Atlas Aircraft Corporation (today known as Denel Aviation) in South Africa in 1966. 125 aircraft were built in South Africa. According to Potgieter and Birns, pilots referred to the Mk I as a docile, forgiving, stable and easily controlled aircraft in comparison to the North American Harvard piston engine trainer also in service with the SAAF at the time.[1]

The Mk II version was developed as a single seat close support variant of the Mk I.  Manufacture of this model began in 1974 and the aircraft incorporated additional fuel tanks, advance avionics and two 30 mm cannon on each side of the fuselage. Its six underwing hard points could carry up to 4 000 lbs (1 814 kg) in ordnance, fuel or photo-reconnaissance pods.

Keyter writes that those who served on the Namibian / Angolan border between the years 1975 and 1989 became well acquainted with the Impala Mk II as the aircraft often flew over the forward bases on close support operations.[2]

Although much slower than other SAAF jets of the period such as the Dassault Mirage III and F1, the excellent manoeuvrability of the Impala Mk II gave it the ability to outfox many anti-aircraft guns and surface-to-air missiles deployed by enemy forces in southern Angola. The aircraft was also able to operate from basic airfields in the operational area. At times it would be required to fly at low altitudes to avoid interception by enemy aircraft.

A former Impala Mk II pilot recorded that the aircraft was said to be a pleasant handling aircraft even though it was light in pitch. Apparently, once one got used to this, the aircraft became a pleasure to fly.[3] Pitch in this context refers to the movement of the aircraft in an upward or downward motion. Consequently, when an aircraft is light in pitch it is inclined to automatically increase its altitude.

In total the SAAF had on strength 62 Italian built MB 326 aircraft, 125 Impala Mk I trainers and 73 Impala Mk II close support aircraft. For a period of 30 years these aircraft served in seven combat squadrons as well as No 85 Advanced Flying School and the famous Silver Falcons Aerobatics Flying Team. By 2000 all Impala aircraft had been withdrawn from service and replaced with the British Aerospace Hawk Mk 120 lead in fighter/ trainer.

The Atlas Impala Mk II at the DITSONG: National Museum of Military History

The Impala Mk II on display at the DITSONG: National Museum of Military History was provided with the serial number 1045.  It was delivered to 15 Air Depot, SAAF, from Atlas in September 1976. A year later it was issued to No 8 Squadron based at AFB Bloemspruit in Bloemfontein. The aircraft was detached from the squadron on four occasions for service in the operational area on the Namibian / Angolan border but it essentially remained with No 8 Squadron until it was retired from service in 2000. The unit emblem of No 8 Squadron is located on the tail.

An interesting observation is that there are no SAAF markings on the aircraft. Originally the SAAF identification insignia was the castle emblem with the leaping springbok in the centre as is found on the Dassault Mirage IIICZ and the Hawker-Siddeley Buccaneer S Mk 50 located at the Museum. After 1994 the leaping springbok emblem was replaced with the SAAF eagle emblem.  However, at the time the Impala was discharged from service, the SAAF was in the process of receiving the new nine pointed star insignia and the existing markings were deleted.

Specifications of the Impala Mk II

Why was the aircraft named after this particular animal? The reason is not well documented. While the aircraft was an aggressive fighter capable of delivering a vast amount of fire on enemy ground forces, the antelope was a timid peaceful herbivore.  The writer believes that the aircraft was called the Impala purely because it had similar traits to its antelope namesake. Notwithstanding its status as a fighter, the Impala aircraft was small and in no position to take on larger and more technologically advanced fighters. It was therefore designed to be capable of quick manoeuvrability and use its medium air frame to escape from danger in a similar fashion to the antelope.

Whether operating at high altitude or at a low level, the Impala was an agile aircraft and an effective weapon in the SAAF arsenal.