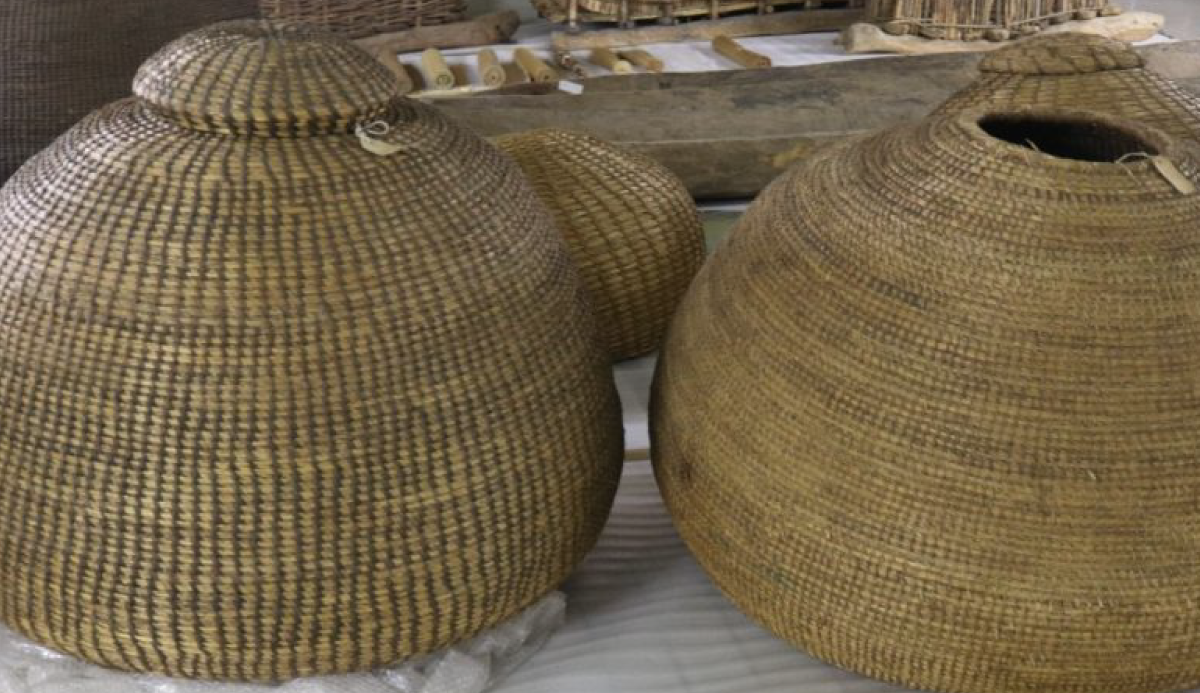 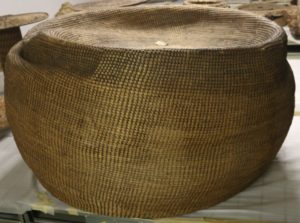 Pictured above is a grain storage basket, Sešego in Sepedi language. It was bought from Phineas Phelego of the Hananwa people at the southern foot of the Blouberg, Leipzig in the Limpopo Province. This basket is currently part of the Anthropology Collection of the DITSONG: National Museum of Cultural History and was collected in 1966. The basket was used to store maize and wheat. Such large grain baskets are usually buried in the cattle kraal as follows: a large hole is excavated in the centre of the kraal and lined with grains (called ditokole) at the bottom of the hole, one or two foot thick. The basket is then placed in the hole so that the bottom rests on the wheat. Two poles on which a crossbar rests are planted opposite sides of the hole. A strap is fastened to the transverse pole, while the other end which is fastened to a strong beam of about 3 metres, is placed in the basket so that the transverse one passes in front of the mouth. A further two poles of about 3 by 4 metres are planted in the beam about 2 metres apart. At these two poles two ends of a cowhide are blurred so that the other end runs through into the basket.

The cowhide serves as a funnel on which the grain is poured so that it enters the grain basket. Beaten wheat grains are also placed around the grain basket. The grain is crushed inside the basket with a stick called thata. When the basket is full, the jaw, sekhurumelo is fastened around the mouth with wooden pegs. On top of the closed mouth, threshed wheat is also thrown so that the whole basket is covered with it, and the hole is finally covered further with dry cow dung. Sometimes the lid is filled with threshed wheat because the water or moisture that otherwise would have gone through the month soaks into the grain and rots. The cow dung also absorbs a lot of water and helps keeping the ants away. Sometimes in areas where many ants occur, a large fire is made in the hole before the basket is placed in it, which also prevents the ants from eating the basket and grain. This particular basket took Phineas Phelego about two months to complete. The grass from the base of the basket was sewn together with the bark of a tree, which is firmer than the grass rope, modi with which the rest of the mouth was sewn together.

Although the history of basket making in South Africa has not been completely researched, areas that have been covered so far are sufficient to enable the contemporary researcher to link recent developments to past traditions. Basket making is a form of creative production, defined as a “craft,” and “was encouraged among Black South Africans under the apartheid regime. It fell within the ambit of what was derogatorily labelled “Bantoekuns” (Bantu art) in Afrikaans, because it was seen as inferior to European arts and crafts”. Oddly, the efforts made by Jack Grossert, who was in charge of “native” education in Natal in the 1950s and 1960s, to promote the teaching of such crafts in the rural schools, may have contributed greatly to the preservation of basket making traditions in that province in particular. The preservation of basket making has given rise to the development of new cooperatives in the production of such objects, primarily for sale in the urban areas. Similarly, extensive traditions of basket making were documented by Margaret Shaw, especially in the Eastern Cape, but these have not survived to the present.

Figure 2: Some of the storage grain baskets in the Museum’s Anthropology Collection (photograph by author)

Sorghum could be stored for over 10 years in the sešego and still maintain its quality and an improved taste. Because of the material used in weaving it, sešego is able to absorb any possible sweating that might exist due to embryonic breathing of the sorghum grains. Aloe ash was applied to some of the sorghum for prevention of weevils. “Historically, most African baskets were made as vessels for containing various foodstuffs, from grain to vegetables. They were made in a wide range of sizes, from the very small beer pot covers (imbenge) made by Zulu and Ndebele speakers, to woven grain storage baskets made by speakers of Northern Sotho (sešego) and Zulu, in varying sizes, the largest being big enough to hold an adult human. Flaring conical baskets were made in calibrated sizes by Tsonga-speakers”. Basketry has a long history and in the past it involved the use of only locally available materials and techniques of making grass were passed down from one generation to another. Thus, this is one of the crafts that can be used as a vector for an African identity.