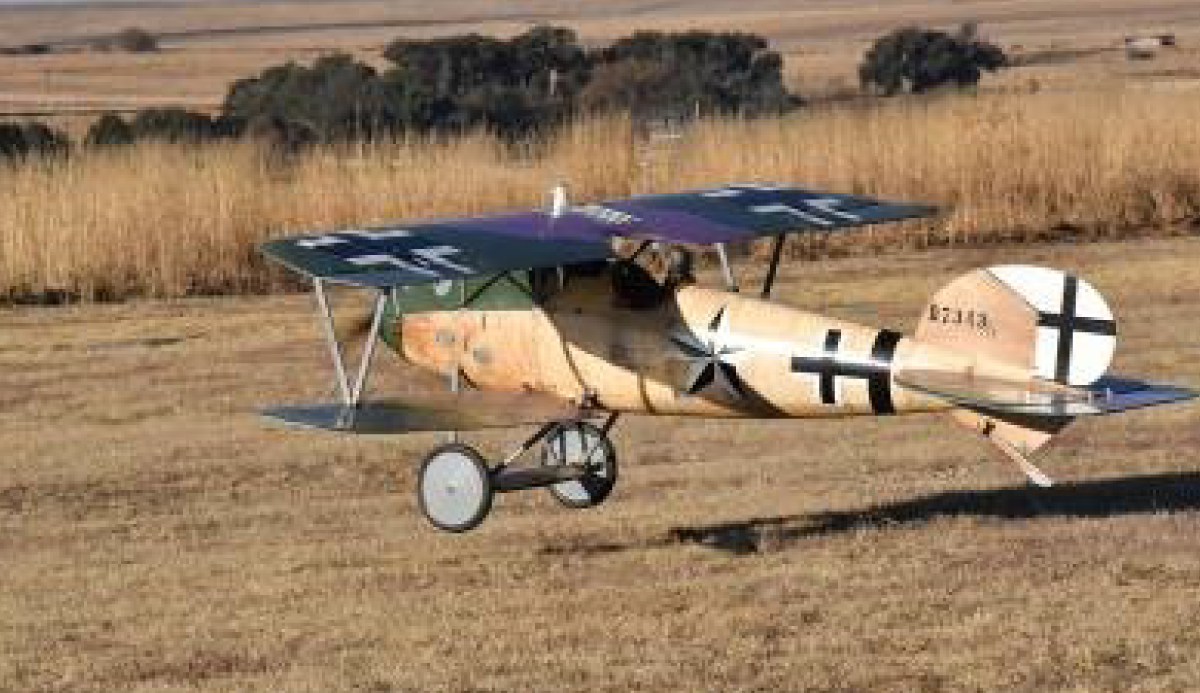 Two ¼ scale model aircraft were donated to the DITSONG: National Museum of Military History (DNMMH) in 2021. The models are true working depictions of the Albatros D Va fighter and the Gotha G.II bomber, both operated by the German Imperial Air Service during the First World War (1914 – 1918). The models were designed, built and flown by the donor, Mr Herman Grobler of Secunda.

The Importance of the donation

The model aircraft provide a visual comparison of the relative size of the Gotha G.II, the first strategic bomber produced during the First World War, as opposed to the single seat Albatros D Va fighter. The D Va is also an example of the improvements that took place in aircraft construction during that war as it was designed using monocoque (shall loadbearing) construction techniques.
The historical significance of the two aircraft will be discussed further. The Albatros D I and D II were the first of a new generation of fighter aircraft to enter service in October 1916 with the German Air Services. The aircraft were designed by Albatros-Werke and were far superior to Allied fighters at that stage of the war. The main feature was the streamlined monocoque fuselage built around the 160 hp in-line Mercedes engine. Monocoque implies that the chassis was integral with the body of the aircraft.  The propeller spinner was also precisely contoured into the nose of the fuselage and the aircraft was equipped with two machine guns which fired through the arch of the propeller.[i]

An updated version, the Albatros D III, was introduced following test studies carried out on a captured French Newport fighter. This aircraft was a sesquiplane version, which is described as a bi-plane with the lower main plane designed to be half the size of the other.[ii]

While the D IV was originally earmarked to succeed the D III, problems experienced with the design of the engine precluded this model from entering service. The D V, which became the next production version in 1917, was also plagued with complications. It had a lighter airframe, was slow in manoeuvring and the design of the assembly of the wings onto the fuselage led to many cases of wing failure. The response to this was the development of the D Va which provided a much stronger and reinforced design of both the fuselage and the wings as well as a more powerful 180 hp engine.[iii] 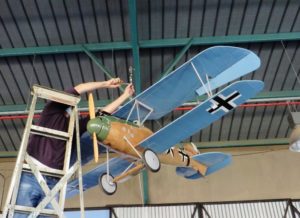 Despite the many improvements, the D Va was still beset with various structural problems. The German Air Service had no alternative at the time but to make use of the aircraft until new fighter design variants could be brought into service. By May 1918 a total of 1512 D V and D Va aircraft were operating along the Western Front in France and Belgium. Even so the aircraft was soon out-performed by newly developed Allied aircraft also introduced by that time – these being the Scout Experimental Se 5a and the Sopwith Camel – and heavy losses were experienced in action against these aircraft. While the numbers of D Va had decreased significantly by 1918, a few continued to fly in action until the armistice in November 1918.[iv]

Figure 2: The model Albatros D Va being placed on display at the DNMMH 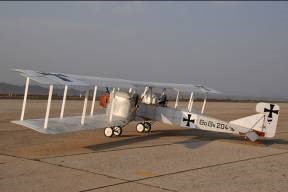 The Gotha heavy bomber was developed by Gothaer Waggonfabriek in response to a major strategic objective of the German High Command. This was to attack and bomb the United Kingdom across the North Sea. Initial bombing raids were carried out by the Imperial German Navy using Zeppelin lighter-than-air airships. The losses incurred in such raids and the realisation that airships were completely exposed to hostile fire led to an acceleration in the development of G-Type bomber.  By May 1917 these aircraft possessed the essential endurance, speed, manoeuvrability, ability to fly at high altitude and load bearing capacity to carry out operations required to meet the strategic objective.[i]

After eighteen initial G. I aircraft had been designed, Gothaer chief designer, Hans Burkhard, introduced further modifications to the fuselage which improved the centre of gravity and wing-fuselage assembly. This became the G. II model which was also powered by two 220 hp Mercedes D.I.V. engines and fitted with a standard four-wheel undercarriage and conventional tailskid. The latter reduced the danger of over-turning on landing. Fuel was stored in tanks located in the large streamlined engine nacelles while special bomb racks inside the fuselage could carry up to fourteen 10 kg bombs.  A second machine-gun mounted behind the wings provided defence against enemy fighters attacking from behind and below. The various sections of the aircraft were designed to be self-contained and the fuselage, engines, wings and undercarriage could be dismantled and fitted onto three railway flatcars for transport.[ii]

Although production of the G. II commenced in April 1916, only ten were eventually constructed.  According to Cooper not much is known of the performance of the G. II in combat operations.  It is believed that eight of the ten aircraft produced were used on the Balkan Front. The cause of this limited service was the technical problems experienced with the engines and the weak structure of the ailerons.[iii]

The successor models of the G. II were the G. III and the G. IV. The G. III had a much stronger design with a reinforced fuselage built out of plywood, two 260 hp engines and ailerons fitted to both the upper and lower main planes. White states that this model served as the test prototype for the G .IV which became the main production model in 1917.[iv]

All four models of the G-Type bomber were designed with a large, spacious open cockpit with three interconnected sections complete with walkways between them for the crew. At the front of the aircraft was the commander’s position which was fitted with a machine gun on a ring mounting and the Goertz bomb site. This section also had the opening for the crew to enter and leave.  Directly behind was the pilot’s section which was equipped with a large wheeled column and a brass instrument panel. The rear-gunner’s section was immediately aft of the trailing edge of the lower main plane. Later models also featured an open tunnel inside the fuselage behind the rear gunner’s position from which the gunner could reposition himself to fire from the tail of the aircraft.[v] 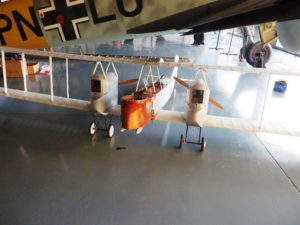 Daylight raids on London and south-eastern England took place between May and September 1917. The formations of bombers in each of these raids were relatively small with only 28 aircraft forming the largest group assembled together at one time. The bombing campaign did initially lead to the withdrawal of two Royal Flying Corps squadrons from the Western Front to assist in the defence of London. Cooper believes that this dissipation of aerial forces from France, together with the effect on the moral of the local British population which found themselves in the firing line, provided a certain amount of success for these bombing raids. He adds, however, that the effect of the bombing raids began to weaken as the numbers of British fighters and anti-aircraft defences increased. By September 1917 the Germans had been forced to turn to night time bombing raids.[vi]

Figure 4: The front of the model Gotha G. II.

The general characteristics of the ¼ scale model are as follows: 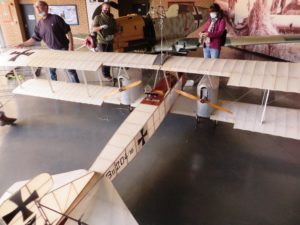 Figure 5: The model Gotha G. II being placed on display at the Museum.

Both the Albatros D Va and the Gotha G. II were not as successful in air operations as had been anticipated. Nevertheless, they epitomise advancements made in the design of aircraft which ensued as a result of the First World War. These improvements in design techniques would be tested further and introduced into more innovative designs of aircraft that would emerge as the 20th century progressed.

The Aviation Collection at the DITSONG: National Museum of Military History is considered to be one the finest in the world and provides examples of the history and usage of military aviation from 1914 to present day. The two new exhibits are the first examples of working German First World War ¼ scale model aircraft to be included in this collection. Mr Grobler must be commended for considering the Museum as a repository for his detailed examples of an Albatros D Va fighter and a Gotha G. II bomber.