FIELDWORK IN THE KINGDOM OF THE BIG CATS (BOLT’S FARM) 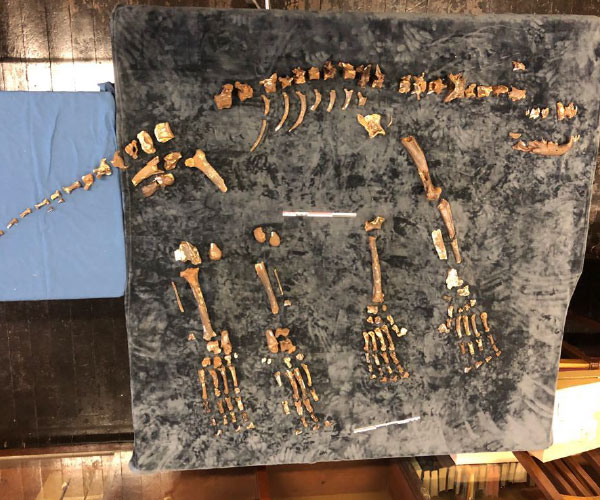 FIELDWORK IN THE KINGDOM OF THE BIG CATS (BOLT’S FARM)

The Bolt’s Farm Cave System (BFCS) is part of the Cradle of Humankind World Heritage Site which is located in the Gauteng Province, South Africa. The Cradle of Humankind was declared a world heritage
site by UNESCO in 1999. Bolt’s Farm is not what most people think of when they think of palaeontological or archaeological sites. It is distributed across three properties (Main Quarry, Klinkert’s property and
Greensleeves property) and has more than 20 fossiliferous occurrences of various sizes (see figure 1). The location is well-known for the finding of one of the best-preserved Dinofelis (an extinct giant cat)
skulls. A finding like this is important for understanding biodiversity, evolution and historical settings. The recently discovered Panthera from the Bridge Cave deposit at Bolt’s Farm is currently under intense
study, with publications pending. So far, we have identified over 600 fossils that are definitively Panthera. Given the rarity of Panthera fossils discovered in Africa to date, this collection of fossils is the largest
single deposit of large cat fossils ever recovered on the African continent (see figure 2). 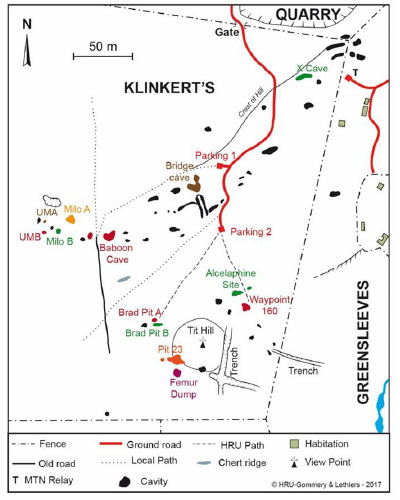 An excavation is conducted to collect the fossils but also other information concerning the geology and to take some samples to obtain physical dating. It is important to know how and when the fossils were
accumulated in the cave. For example, some animals fell and died in the cave, or probably came into the cave to find some water, or sometimes to find a secure place (to protect them against predators) or warmer place during the cold season and died naturally inside the cave. Predators could have also brought carcasses of animals in the cave or even hunted some prey in the cave.

The study of fossil remains gives us some information about the diversity of life (biodiversity) at different geological periods and how the extant biodiversity appears in South Africa. It could help us to understand the evolution of the environment in relation with the past climatic changes. Perhaps it could help us also to understand evolutionary trends within the present climatic change. A team from the Plio-Pleistocene Palaeontology section of DITSONG: National Museum of Natural History (DNMNH), Palaeo Research-Institute from the University of Johannesburg and the CR2P

(Research Centre of Palaeontology-Paris) holds permits for the Bolt’s Farm cave system. They conduct fieldwork and site maintenance on an annual basis (see figures 3-6), and all the fossils excavated under
these permits are housed at the DNMNH, as the Museum is the repository under this permit. The focus of the 2021/2022 fieldwork season was on three fossil sites: Bridge Cave, Brad Pit on the Klinkert
property, and Aves Cave on the Greensleeves property, which are discussed below. Fossils from decalcified breccia are mapped using a leisure theodolite, which records the exact position of the fossil before it is removed from the ground (digging area), and the coordinates from the theodolite will accompany the specimens from the site. Preliminary identification of fossils during fieldwork is vital since it makes curators’ jobs easier because most specimens will be identified and field notes will accompany them.

Aves Cave I, part of the Bolt’s Farm Palaeokarst System, includes breccia deposited during the late Pliocene, between 2.5 and 3 million years ago. This age estimate is based on the existence of two suid
taxa, Potamochoeroides hypsodon and Notochoerus capensis, in the breccia. These two suids are known to coexist at Makapansgat in South Africa, although they are underrepresented at other subcontinental fossil sites. Different suid taxa, Metriodiochoerus andrewsi and Phacochoerus modestus, have been discovered in a sequence of younger breccia infillings in the Bolt’s Farm Palaeokarst System. As a result, the suid fauna of Bolt’s Farm has changed dramatically over geologic time. Rodents (such as mice and/or rats), birds, snake vertebrae (in the process of being described and/or
identified), carnivore dentition, and bovids are also abundant. These are crucial since they will aid in the reconstruction of the palaeo-environment (hopefully solidify what suids are telling us about the environment). 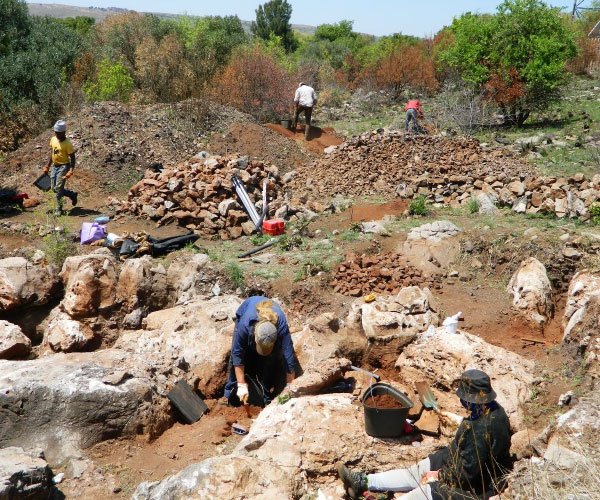 The HRU team uncovered numerous new noteworthy fossils in the previous few years, including a partial bald ibis (Geronticus calvus) cranium at BPB (Pavia et al., 2017), and a few teeth from a family of Suid
also known in East Africa, the Tetraconodontinae (Gerontochoerus koobiforaensis) (Pickford et al. 2019). The skull of the bald ibis is now on display at the DITSONG: National Museum of Natural History’s BFCS exhibition, and the public is encouraged to visit; fossilized birds are uncommon in the fossil record. 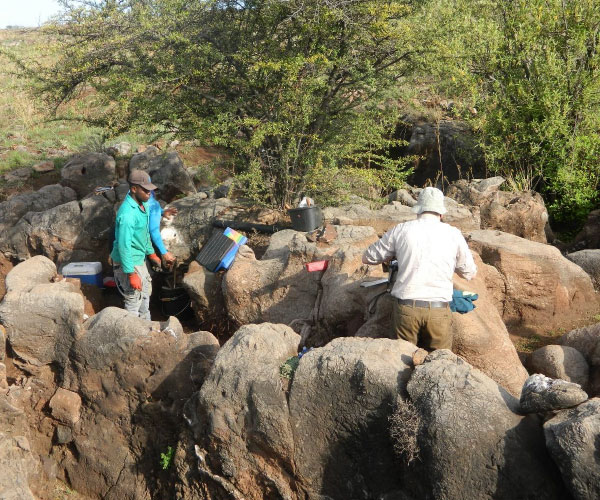 The Bolt’s Farm team have discovered more equid and panthera fossils and continue to excavate the Panthera site, where eight panthera individuals have been discovered so far. Phacochoerus modestus,
another suid species, was discovered at the ‘Panthera site,’ with an estimated age of 1.8-2.0 Ma (Pickford & Gommery, 2020). The remains of a new lion-like pantherine felid are part of the main collection (Kuhn et al., in preparation). Large carnivores are uncommon in Plio-Pleistocene sites in the Cradle of Humankind, but there are at least eight in the ‘Panthera spot’. The majority of the material is made up of postcranial bones. 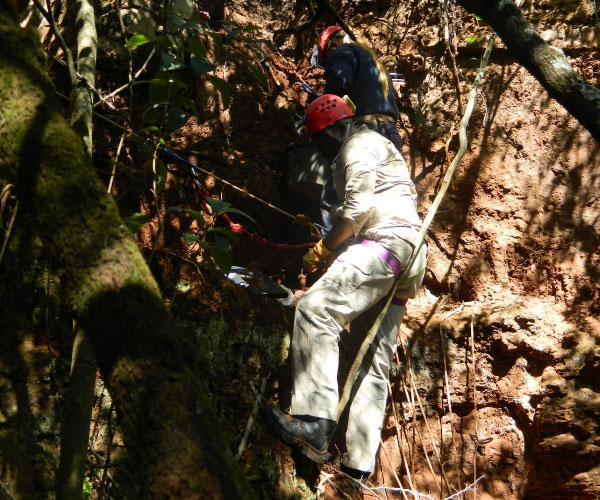 Figure 5
Mr L. Kgasi and Dr B. Kuhn from the Bolt’s Farm team excavating on the cliff surface at Bridge cave.

Geology
Understanding the geology of the cave is crucial in order to determine the history of the site from the formation to the erosion of the cave, and how these fossils were deposited. Dr Tebogo Makhubela, a
geochemist at the University of Johannesburg’s Department of Geology, and Dr Johann Schnyder, a geologist (sedimentology) at the Institut des Sciences de la Terre de Paris (ISTEP) of Sorbonne University in France are in charge of painting a picture for us of the geology of the sites. 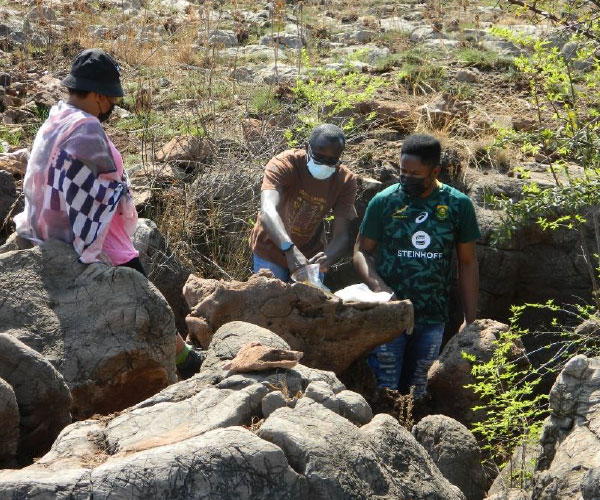 To be included in our scientific database, fossils must be collected from the field, preserved, and analysed in a collection. The DITSONG: National Museum of Natural History, in collaboration with its partners, is advancing science by investigating what happened in the Cradle of Humankind and reporting back to the public through exhibitions such as “The Fossil World of Bolts Farm – From Field to Exhibition”, as
well as interacting with the scientific community through peer-reviewed articles. The public is invited to come to the Museum to see and hear the stories of these fossils.