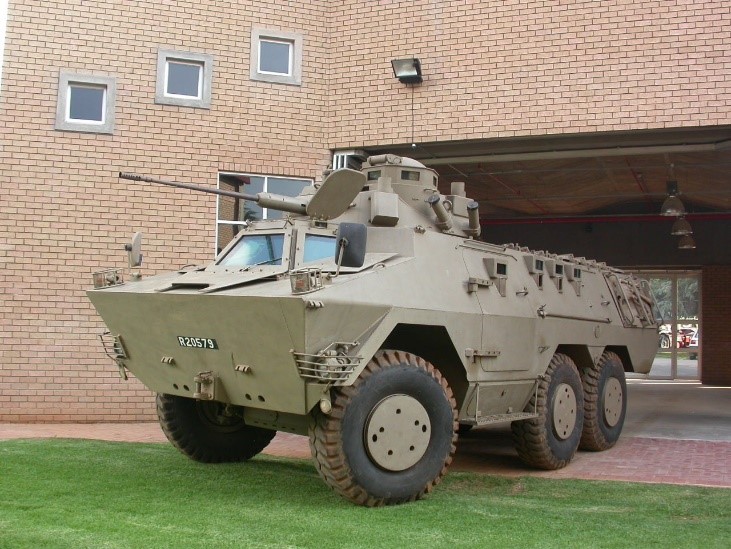 During the 1960s and early 70s, South Africa was forced to establish its own arms industry because of the increasing military threats and the United Nations (UN) sanctions.

The Armaments Corporation of South Africa (ARMSCOR) was instituted in 1968 in terms of the Armaments Development and Production Act, No 57 of 1968. The act defined the task of ARMSCOR as promoting and coordinating the development, manufacturing, standardisation, maintenance and acquisition or supply of armaments, and it was given the task of coordinating the development of South Africa’s military-industrial infrastructure to produce and supply the South African Defence Force (SADF) with military equipment that would match or even better that of the country’s enemies. A light armoured vehicle was needed for the demands of a rapid offensive, combining maximum firepower and providing strategic mobility to the mechanised infantry units accustomed to operating independently across the vast distances of Southern Africa.

One locally developed light-armoured vehicle that was very effective, versatile, and widely deployed in Angola was the famous Ratel (Afrikaans for honey badger), named after this brutal and tenacious animal. The Ratel was the first wheeled infantry vehicle to enter service worldwide and was built on a modified MAN truck chassis. The Ratel was developed at the height of the sanctions against South Africa. It was the best vehicle of its kind because of its cross-country ability, six-wheel drive with an all-axle independent sprung, speed over rough terrain, ease to drive, power steering, automatic gearbox and easy maintenance. The Ratel’s swiftness, massive wheels, bush breaking ability and variety of weapon system makes it the best vehicle for ultra-mobile African bush warfare.

Figure 1. An example of the Ratel20 IFV at the DITSONG: National Museum of Military History.

In the mid-1960s, South Africa saw the need to replace the foreign imported armoured troop vehicles such as Saracen armoured personnel carriers, as they were not competent enough against modern threats and the challenges found in the Southern African environment.

Work on the development of the Ratel started as early as 1968. After the South African Defence Force had evaluated and rejected numerous designs, including the Thyssen Henschel UR-416, Berlit VXB-170, the Panhard M3 and the EE-11-Urutu, the Springfield-Büssing prototype was accepted for service as Ratel in March 1972. The original prototype was sold to Belgium, where an Amphibious derivative known as Sibmas, Hispano-Suiza HS.820, was produced. The latter was selected for the Ratel’s primary armaments due to its previous success during trials with Eland armoured cars. However, at the time of production, this was superseded by a variant of the Modèle F2 produced under licence as the Denel GI-2.

Sandock Austral undertook production and produced the vehicle hulls at its shipyard in Durban before having them transported by rail to its Boksburg facility for integration with the chassis and drive train. Each Ratel was powered by a Büssing D BTXF 3256 six-cylinder diesel engine.

The first prototype Ratel was made of mild steel, which allowed quicker modification work. The first four production Ratels were put through their paces at the Elandsfontein vehicle testing grounds near Pretoria in 1975. From 1975 onwards, the first batch of 13 Ratels (Mk1) was delivered from the production line at Sandock Austral in Boksburg.

Today there is a family of Ratel mechanised infantry combat vehicles that consists of multiple variants. All variants can reach a speed of 105 km/h; however, logistically, the Ratel is only capable of a maximum speed of 86 km/h.

The Ratel platform, the basis for an entire family of fighting vehicles, is the backbone of the South African mechanised armed forces. It included the following:

The main variant is the Ratel 20, armed with a French giant cannon in a two-man turret, plus one coaxial, one over the turret and one on a pintle mounting plate over a hatch in the rear hull. The 20 mm cannon has an effective range of 1 500 m and can engage light-armoured vehicles. This entry-level model was to transport troops. Firing ports and vision devices are provided for most occupants or the crew compartments, which are entered through side doors or another at the rear. The crew consists of the vehicle commander, the driver, the gunner, and up to eight infantries with good front armour protection against 12,7 mm rounds and 7,62 mm ammunition. 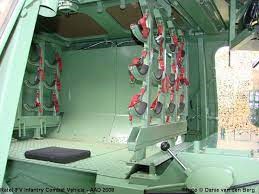 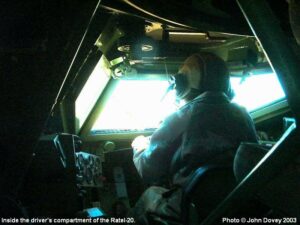 SPECIFICATIONS OF THE RATEL 20

The SADF first tested the Ratel during Operation Reindeer, a major raid on the People`s Liberation Army of Namibia (PLAN) based out of neighbouring Angola. The purpose of the operation was to experiment with an integrated team consisting of the mechanised infantry mounted in the new Ratels, backed by the Eland armoured cars. Because of the four-wheel Eland’s lack of mobility, there were many delays and complications. The Elands couldn’t keep pace with the Ratels and had to be frequently towed out of the mud and thick sand. Elands were powered by petrol engines, which made the operation complicated and necessitated a separate logistic tail for that of diesel-powered Ratels.

Although the Ratel did not originally feature in any plan of the South African Border War, it was evident that it was effective and had combat capabilities in its own right. After Operation Reindeer, when the SADF decided to establish a permanent mechanised combat unit in the operational area, Commandant Johann Dippenaar was appointed to set up this unit, and the Ratel became the backbone of the mechanised infantry.

61 Mechanised Battalion became part of the regular order of battle and was primarily tasked as the army’s immediate response unit due to its versatility. It was equipped with armour, armoured personnel carriers, artillery, anti-aircraft, personnel, weapons and fighter vehicles consisting of multiple variants of Ratels. 61 Mechanized served for over a decade in the territory fighting the guerrilla war against the South West Africa People’s Organisation (SWAPO) and taking conventional operations against Cuban and Angolan forces.

In 1980, two years after Operation Reindeer, the former chief of Army (RET) General Constant Viljoen, who was not present at the previous operation, accompanied 61 Mech on Operation Sceptic, also known as Smokeshell. Smokeshell was also a codename for the People’s Liberation Army of Namibia (PLAN), which was the main focus of the attack. Operation Sceptic was launched on the 10th of June 1980 as a lightning attack on a SWAPO base. It became the largest anti-South West African People’s Organization (SWAPO) sweep during the South African Border War as more and more SWAPO caches were discovered. During the operation, the South African army clashed with mechanised elements of SWAPO for the first time, and SWAPO lost its forward base facility. 380 SWAPO members were killed, and several 100 tons of equipment and supplies, as well as many vehicles, were captured by the South African security forces. Seventeen members of the SADF were killed. The South African Defence Force became increasingly aggressive as the war progressed, and there were more and more Angolan casualties due to those incursions.

Operation Meebos occurred during July and August 1982, intending to attack SWAPO and PLAN bases and the new regional headquarters in Southern Angola from the South African bases in South West Africa. The plan involved using South African Air Force helicopters flown from mobile Helicopter Administrative Areas (HAA) with SADF tactical headquarters deep in Angola. These helicopters would fly 32 Battalion and paratroopers from the HAA areas. SWAPO targets were identified by reconnaissance teams deep in the Angolan bush and by signal and human intelligence.

The 1998 SADC intervention in Lesotho, led by the SANDF Ratel, played a major role with various United Nations peacekeeping forces making use of the Ratel infantry fighting vehicle in conflict zones.

Exported Ratels have also been used during the Libyan Civil War (2011), Yemeni Revolution (2011-2012) and other global crises. 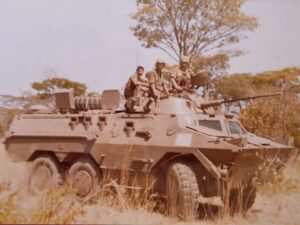 Figure 4. A Ratel during operation Meebos in Angola 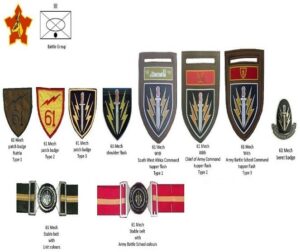 The Ratel became the first wheeled infantry fighting vehicle (IFV) to enter service worldwide. 43 years later, Ratel’s different configurations are still in service today. The replacement seems to be slipping further away as the progress on Project Hoefyster (to supply 243 Badger infantry fighting vehicles for the South African Army) and the contract between ARMSCOR, Denel, and the Department of Defence for the long-delayed replacement is not feasible in its current form.

Regardless of a plan to replace the Ratel, it seems as if it will be in service for the next 15 years, and the goal is to upgrade and modernise sufficient Ratels for at least one mechanised infantry unit.

It is clear that the Ratel IFV had wielded a significant influence on the deployment of doctrine for mobile warfare during the 23 years long the South African Border War.