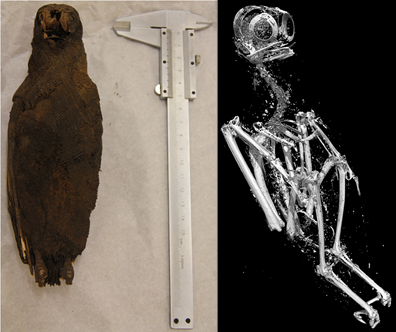 The ancient Egyptians are renowned for the mummification of their dead as it formed part of their belief system regarding life after death. Along with this, a number of animals were also mummified, in fact, more animal mummies have been discovered than human mummies. The reason is partly because many of the ancient Egyptian gods took on the forms of animals, for example, the god Horus was represented by falcons; Bastet, the cat; Thoth, the ibis, and so forth. The study of mummified animals is varied and extensive with the main focus on the types of animals mummified and methods used in mummification.

The DITSONG: National Museum of Cultural History has two such animal mummies; these are two small falcons representing the god Horus. In 2013 the two falcon mummies were scanned using a computed tomography (CT) scanner at the Stellenbosch University in a larger research project about South African animal mummies housed in museums. These scans produced a 3D rendering of the falcon mummies and the following information could be gathered from these scans.

The first falcon was in fairly good condition. Part of the beak was missing, some damage to exposed ends of the feathers could be seen, the wrappings are dark brown in colour, and unfortunately, the colouring of the feathers is not clearly discernible with any distinct markings. The type and species of the falcon could not be determined. The falcon measures a length of 20.6 cm and a width of 5.5 cm. 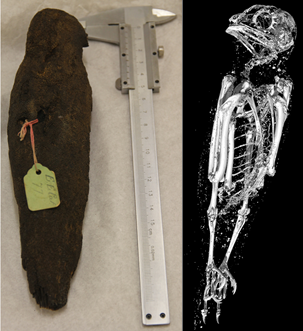 Figure 1: Photograph and CT scan of the first falcon.

The second falcon was also in fairly good condition, but the wrappings on the head were damaged, exposing part of it. The beak is missing as well as the talons on the feet. Damage to the wrapping on the right side of the falcon has exposed the feathers on the wing that fall out easily. The wrappings are dark brown; the feathers are dark brown almost black without any distinct markings. The falcon measures a length of 19 cm and a width of 6.7 cm.

Figure 1: Photograph and CT scan of the second falcon.

The CT scans revealed the skeleton of two birds of prey, the first with part of the beak missing and the second with the beak and talons missing. The beak is an important feature in trying to identify what species of the falcon was used in representing the god Horus. The feathers could also be important in identifying the falcons, but unfortunately, the edges have been damaged over time and the colour of the feathers could not be determined. Further research on these two falcons should be done to determine what species they are and this could give an indication of the origins and the distribution of the falcons used in this mummification. One could even strive to determine the age of the falcons to determine if they are of similar age or not, or even if these falcons were healthy or not.

It can be said with certainty that the two mummified falcons that are housed at DITSONG: National Museum of Cultural History are indeed mummified falcons and not mummies that were made with other materials to look like a certain animal. Why these were done is not quite clear but it could be that at the time, the Ancient Egyptians did not have that particular animal available for mummification, but other reasons could well play a part.