SOCIAL SPIDERS AND THEIR BACTERIA 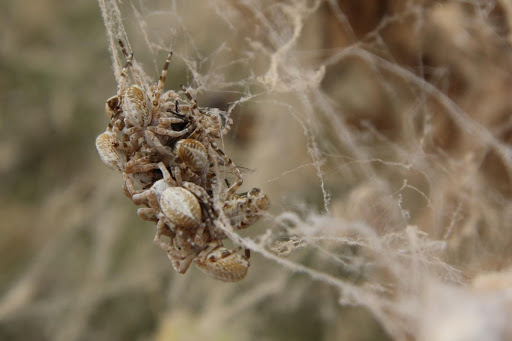 SOCIAL SPIDERS AND THEIR BACTERIA

Some time ago my eyes caught the Daily Maverick “IN NUMBERS” fun fact. It read: “2,368. The number of species of bacteria found in a 2012 study that swabbed 60 belly buttons; 1,458 were new to science.” I remembered this study and the headlines that it made at the time. Scientists have made great strides since then in pointing out that bacteria are not all bad (to the contrary!), but unfortunately the message is trickling down very slowly to the consumer, and shelves in grocery stores still hold their share of antibacterial soaps and washing powders. This fun fact is thus the reason why I decided to write about a study that I did with colleagues from Aarhus University (Denmark) on microorganisms. Microorganisms are those organisms that can be seen only with the help of a microscope. Bacteria form a large component of microorganisms. In our study, we recorded mainly bacteria, but also some fungi that were associated with social spiders (scientific name, Stegodyphus dumicola). In other words, we characterized the microbiome of the spiders. Microbiome refers to those microorganisms that live in a particular environment. In our case, the microenvironment is the body of the spider.

Scientists long ago recognised that many multicellular organisms, in other words, those that are made up of many cells (plants, fungi, worms, insects, and mammals, to name but a few examples) have their own microbiomes. These microbiomes mostly consist of bacteria, which, in animals, usually live in the gut.

Bacteria are widely misunderstood organisms, often referred to as “filthy germs” and seen as being at the bottom of the evolutionary ladder. This is a grave mistake. In evolutionary terms, where success is often measured by how successful an organism reproduces, bacteria are amongst the most successful organisms on the planet! What is more, the microbiome of an animal is critical to the health of that animal. In humans, an unhealthy microbiome has been linked to diseases ranging from diabetes (Chen, et al., 2021) to depression (Peirce & Alviña, 2019), and the list is growing. There is thus no doubt that humans need their bacteria! Animals go to great lengths to ensure that their young have a healthy microbiome. We, humans, acquire our bacteria from our mothers, partly while passing through the birth canal; baby hippos eat the faeces of their mothers to get the bacteria that they need. 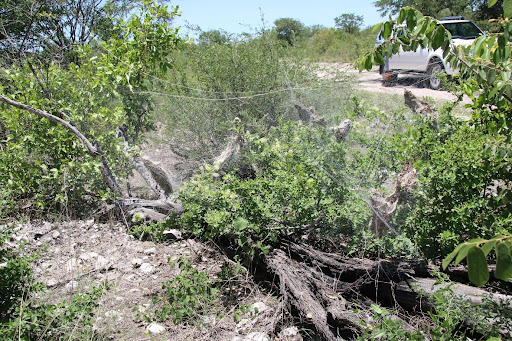 Why study the microbiome in spiders?

We studied the social spider species, Stegodyphus dumicola, which belongs to the family Eresidae (velvet spiders). These spiders are very interesting in that they are living in social groupings in a nest spun with silk (Figure 1), which is rather unique for spiders. Apart from a handful of species, spiders are solitary creatures. When placed together, they attack each other. In S. dumicola, however, members cooperate in prey capture (Figure 2), and all females participate in feeding the young, which they do by regurgitating food (Figure 3).

Figure 2: Social spiders that share a nest cooperate in the capture and immobilisation of the prey. (Photo credit: Tharina Bird) 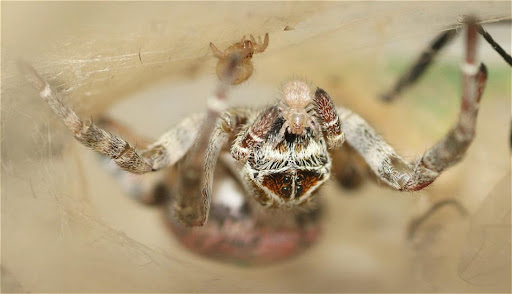 Figure 3: Even though not all females in a nest lay eggs and have young, all females feed the young in the nest. They do this through regurgitating food, which the spiderlings ‘drink’ from the female’s mouth. (Photo credit: Anja Junghanns)

Mothers also do the ultimate sacrifice: towards the end of their lives their bodies start to self-digest, and when that has progressed sufficiently, the mother sits still for the young to start to feed on them, thus offering themselves as food for their young (Figure 4)! This is called matriphagy (Junghanns et al., 2017). 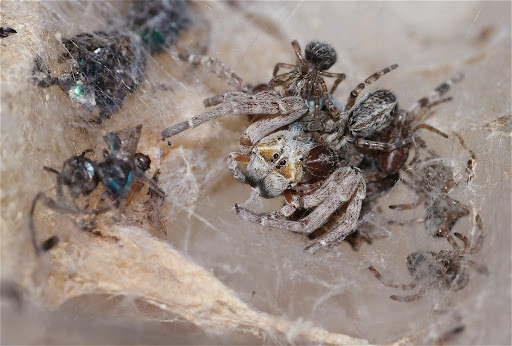 Figure 4: Mothers of the African social spiders do a final act of self-sacrifice for their young. After much of the female’s body has been digested from the inside by her own enzymes, she sits still so that the young can feed on her. This is called matriphagy. (Photo credit: Anja Junghanns)

The social spider S. dumicola has a wide distribution across a range of temperature and humidity gradients. Members of this spider species build their nests around small branches in trees (Figure 5A), extending the nest with time. As they extend the nest, material such as leaves, prey remains, the spider exuviae (old ‘skin’ shed as the spiders grow), and spider excrement, are incorporated into, or accumulate inside the nest (Figure 5B). Nests, therefore, become a perfect environment for pathogens (microbes that could make spiders sick or even potentially kill the spider colonies) to flourish. The question that we wanted to answer was whether these spiders have some bacteria that are not only beneficial to them but on which they depend for their survival. Such bacteria that a spider needs for its survival are called obligate symbionts. Obligate symbionts could, for example, help spiders to adapt to different environmental conditions, or to fight off pathogens. 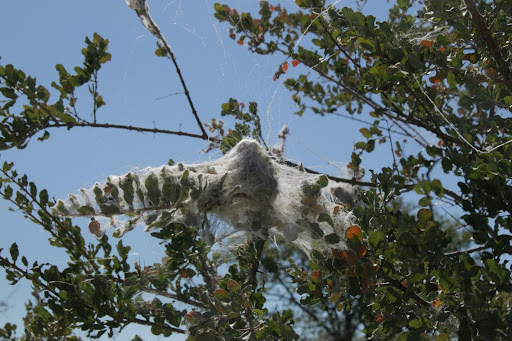 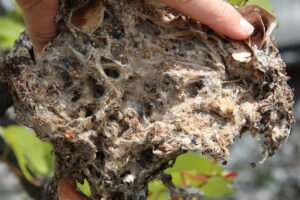 Figure 6: With time, the nest is extended to consist of tunnels and brood chambers. Leaves, prey remains, spider exuviae (old ‘skin’ shed as the spiders grow), and spider excrement, accumulate inside the nest over time, and become part of the nest. (Photo credit: Tharina Bird)

How did we collect our data?

We identified nests in six locations, hundreds of kilometres apart across Namibia and Botswana. Each location represented a spider population. Locations ranged from desert to higher rainfall broad-leave savanna conditions. In each location, we identified five to ten individual nests. Each nest was tagged for long-term monitoring. A tiny ‘weather station’ that looks like a watch battery that measured temperature and humidity, was placed with some nests (Figure 5C). Every three months, for 2.5 years, my husband and I (yes, spouses of scientists often have a hard time choosing holidays with their families!) travelled thousands of kilometres, visiting each nest in all six locations in Namibia and Botswana. The number of spiders in a nest varies greatly. The highest number I counted was just over 800 spiders in a single nest. 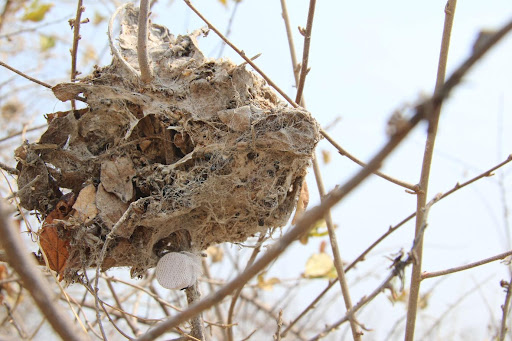 Figure 7: During our study, we recorded data from social spider nests in six populations across Namibia and Botswana, over 2.5 years. We placed a tiny ‘weather station’ with each nest to record temperature and humidity. (Photo credit: Tharina Bird)

We collected three spiders from each nest. Each spider was transferred to its own vial containing a fluid that immediately preserved all DNA, irrespective of, the organism that it comes from. We took meticulous notes of the nests and downloaded the temperature and humidity data. In case a monitored nest died, we identified alternative nests to continue with the research. The vials with the spiders were transported to the laboratory where we extracted the DNA. The DNA samples were then sent to Aarhus University, where then PhD student Mette Busck, in the labs of professors Andreas Schramm (microbiology lab) and Trine Bilde (evolutionary biology lab), sequenced and analysed the DNA to identify which bacteria were present in the spiders. In total, we analysed the microbiomes of 772 spiders. The study was published in the journal FEMS Microbiology Ecology (Busck et al., 2022).

Sharing microbiome in nests but not between nests

We found that within a nest, the spiders share the same composition of bacteria. There was little change in the composition within a nest over seasons. This was to be expected since these spiders are in such close contact with each other; they feed on the same prey and probably transfer their gut microbiome to their offspring when they feed their young through regurgitating their food. What was intriguing, was that different nests within the same populations, even nests that are next to each other on the same tree, differed substantially in their microbiome composition. This is interesting because these nests were often established from the same ‘mother’ nest in the past, for example through some of the spiders leaving the mother nest when it becomes too large or too old, and then starting a new nest (Lubin et al., 2009). Why there is this difference in microbiome composition between these nests is unclear. What our data do seem to indicate is that these social spiders do not have a specific obligate symbiont bacterium species, in other words, they do not need one species of bacterium that is necessary for their survival. However, we cannot exclude the possibility that these spiders have a set of obligate symbionts, and that their relative abundance (numbers) fluctuate randomly. More research is needed on this topic.

Although it is difficult to estimate the exact survival time of a nest, nests die out after one to three years. We were curious to find out why and specifically whether nest death was influenced by bacterial pathogens. In healthy nests, we found that bacterial load (the amount of bacteria per spider, corrected for spider size) did not fluctuate much over generations, but just before a nest died, the bacterial load tended to show an enormous increase. This was especially overwhelming in a nest where the spiders were clearly ‘sick’ when sampled. The predominant bacterium was not the same bacterium in the different nests. As scientists, we should of course be careful not to attribute a pattern (an increase in bacteria) to cause (an increase in bacteria caused the death of a nest). It could, for example, simply be that the deteriorating condition in the nest reduced the immune response of the host spider. All we could conclude about nest survival was that about 50% of nests died annually, and that nest death was not correlated to microbiome composition. Bacteria found in S. dumicola also did not seem to be high virulence pathogens – in other words, the bacteria that we found did not seem to be very contagious or cause great harm to S. dumicola spiders.

Why this study as a museum curator?

As curators working with natural history collections, our research is at the organismal level. That means that we endeavour to understand organisms – not only to which species an organism belongs but also what makes that species tick, asking questions such as: What is the distribution of the species and what affects its distribution? What are its evolutionary history, its future, and its evolutionary journey between these? Which species influences it on its evolutionary journey, and how? Through observations during our fieldwork and the microbiome survey and analyses, we were able to gain much insight into the evolutionary journey of S. dumicola. But, as with so many studies, ours also generated many more questions, and room for lots more research!