“STARVING FOR FREEDOM”: THE 1980S AND 1990S HUNGER STRIKES IN SOUTH AFRICAN PRISONS 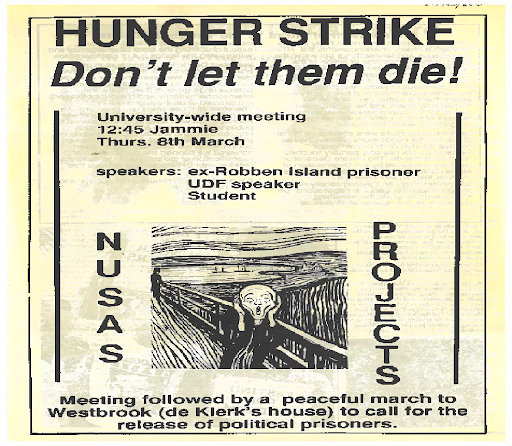 “STARVING FOR FREEDOM”: THE 1980S AND 1990S HUNGER STRIKES IN SOUTH AFRICAN PRISONS

Hunger strikes in South African prisons during Apartheid came as a result of continued human rights abuses and detentions of individuals who had been arrested for political crimes.

On 26 February 1990 prisoners at Robben Island embarked on a hunger strike. They protested against the fact that more than 3 000 political prisoners still remained in jail despite President F.W. de Klerk’s early February commitment to release all political prisoners. They also pointed out that only some of the inmates who have almost completed their terms or who were convicted of furthering the aims of the African National Congress (ANC) or other banned organisations were eligible for release. Their definition of political prisoners was “all incarcerated people who have engaged themselves in the struggle against the system of apartheid”, irrespective of political affiliation. Furthermore, they were also protesting against poor prison conditions; poor and often inadequate food, severe restrictions on access to visitors, communications and correspondence and poor treatment by the prison wardens. 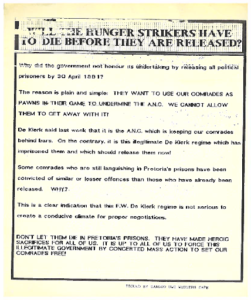 The 4th of March 1990 marked an intensified mass hunger strike of 343 political prisoners on Robben Island, demanding their release to strengthen the bargaining positions of the ANC. All 343 prisoners participated in the strike. However, those working in the kitchen or who were medically unfit were taking water with sugar and salt and one meal respectively. The strike was joined by five white men in the Pretoria Central Prison and the Yengeni trialists, including those who were out on bail. Firstly, the strikers were demanding the release of all political prisoners, secondly, that exemptions be stopped and thirdly, that the state of emergency is lifted. Although President de Klerk had said that he is committed to the release of “political prisoners’’, only seven of the prisoners had been released at the time of the strike. President de Klerk faced considerable opposition from the white electorate as many of the political prisoners were detained for their involvement in acts of violence. This campaign demonstrated a “rare glimpse of political unity among black political prisoners opposed to Apartheid, as prisoners from political movements across the political spectrum joined in this hunger strike for demanding their release”. 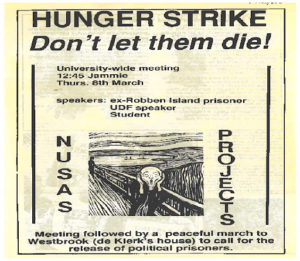 It is worth noting that before 1990 there were also other hunger strikes that took place across South African prisons. On 23 January 1989 twenty detainees at Diepkloof Prison in Johannesburg, went on a hunger strike. They demanded the immediate and unconditional release of all detainees. By the end of March 1989, the strike had achieved national dimensions, involving over 700 persons. Up to 37 hunger strikes had been recorded in the period June 1986 to January 1989 though they were sporadic and isolated. The national strike put pressure on the authorities and they responded by scattering detainees and threatening that no one on strike would be released. The Minister of Law and Order, Adriaan Vlok, was placed under pressure to release more than 600 people by the end of March 1989. It was recorded that more than 10% had been in detention since 1986. The determination of the hunger strikers was illustrated by the fact that 130 were admitted to hospital, from which a number escaped. Sandile Thusi, a Durban detainee, was near death when released after 38 days. The detainees had vowed to remain on hunger strike until their demands were met. Supporters of the hunger strikers were staging daily protests outside Parliament and called on the international community for messages of support to the prisoners.

By the end of August 1990, 1 250 people had been detained without trial in South Africa since the beginning of that year, and at least 283 were still incarcerated.