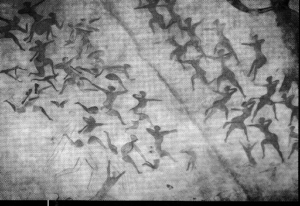 Figure 1: One of the earliest depictions of warfare. A rock painting in Algeria showing warriors using hunting bows (Picture from the book Weapon).

Archery was developed so early in human prehistory that the concept of hunting with bows and arrows may have spread throughout the world along with the first migrations of our species. The earliest evidence of archery was found in South Africa. In northern KwaZulu-Natal, there is a sandstone rock shelter known as Sibudu Cave where the remains of stone and bone arrowheads from the Middle Stone Age have been dated to be between 60 000 and 72 000 years old. Warfare began as a competition for resources and the earliest weapons used in warfare were the instruments used for hunting and gathering those resources. Bows, spears, clubs, and axes were all used in warfare and versions of each weapon were also developed as specialised weapons of war. In most of sub-Saharan Africa, the arrowheads used against humans were the same larger and heavier arrowheads which had been developed for hunting larger game.

While some parts of the world developed increasingly complex bows and arrows, other parts kept the weapons comparatively simple to build, almost disposable items. Areas with simpler bows and arrows included most of South America, parts of Oceania, and most of sub-Saharan Africa. In these areas, archers either relied on very long simple bows to increase arrow range and velocity or poisoned their arrows to increase their effectiveness. Where bows were more complex, range and velocity was enhanced with more complex bow shapes as with recurve bows, and the use of more than one bow material to increase bow elasticity (composite bows). Compound bows are modern bows which make use of added parts such as gears to increase bow power. Although they were weaker, simpler bows had a few advantages. They were easier and more affordable to construct or replace, they did not have to be carefully preserved, and they were easier to transport on long arduous hunting expeditions. The development of more complex bows and arrows was influenced by the need brought on by more intense experiences of war. Nonetheless, while simpler in form, bows and arrows from sub-Saharan Africa were widely present. The ancient Egyptians referred to the region outside their southern borders as Ta-Seti (Land of the Bow). 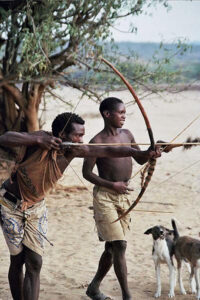 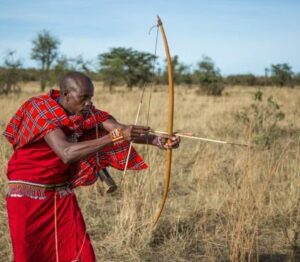 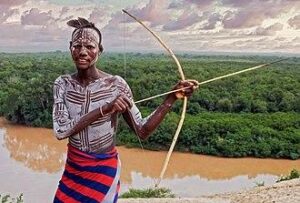 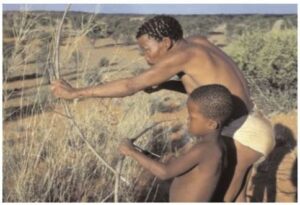 Although firearms slowly came to make bows and arrows obsolete, they continued to be used in much of Africa throughout the twentieth century, and in a few examples, into the twenty-first century. In the early twentieth century archers from the former Land of the Bow (modern Sudan) were recorded to have repelled cavalry while firing arrows from a tight formation. These archers were said to make use of poison created by making a mixture of monkey entrails, snake venom, ulcer pus, and even menstrual fluid. In modern Kenya, poisons were made from scorpion venom and extracted from the strophanthus plant with the arrowheads being wrapped in leather or slotted backwards into the arrow shaft to retain the poison’s moisture and protect the archer. A little further south in northern Tanzania, there are still archers from a traditional hunter-gatherer people named the Hazda of which only a little over 1 000 remain. Similarly, the San people of southern Africa still use traditional bows as primary weapons. The San straightened their arrow shafts by sliding them slowly along the groove of a heated stone called a  !kui. 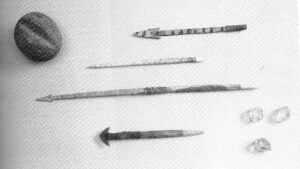 Figure 6: San arrows dotted with poison and the !kui stone (picture from African Arms and Armour by Christopher Spring).

In Oxford, England, the Pitt Rivers Museum has in its founding collection a crossbow from Gabon in the west of Central Africa which it received in 1884. The crossbow was used with iron-headed or poisoned bolts by the Fang and Mpongwe people. 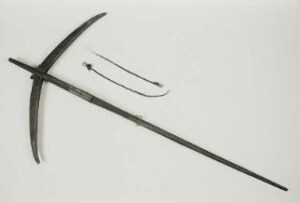 The bow and arrow has persisted in sub-Saharan Africa for a comparatively long time partly due to a regression back to archery during the 20th century. A combination of drought, cattle disease, and forced migrations brought on by colonization led some African pastoralists to revert to hunter-gatherer lifestyles. This meant that during the First World War (1914 – 1918) some African people found themselves with bow and arrows in hand and facing an enemy carrying a rifle. Germany was assisted in the East African Campaign by over 10 000 local people some of whom were using bows and arrows to hunt food. As they fought a war-long withdrawal, under pressure from South African forces, food became increasingly scarce and South African forward reconnaissance groups became more aggressive. Although the locals with the German force never meant to use bows and arrows for combat, they did use them for defense when running unexpectedly into an enemy. This might explain how soldiers from the 10th South African Infantry Regiment of the 3rd South African Infantry Brigade returned from the First World War with East African arrows as souvenirs.

As late as the Second World War (1939 – 1945) there were incidents where Japanese soldiers came under arrow fire from locals on the Pacific islands, and more recently bows and arrows where used in battle in Kenya in 2009 when a clash between Kisii people and Kalenjin people killed four combatants.

The current prevalence of archery on the African continent takes the form of nearly thirty African countries who take part in competitive archery as members of the Federation of African Archery (FAA).