Understanding the environments and mammal species that existed in South Africa during the Plio-Pleistocene, including primate and human lineages, requires a thorough understanding of the physical setting of deposition (cave geology), the distribution of mammals and environments across the landscape (paleobiology and paleoecology), and the process of converting biological materials into fossils (taphonomy). Current interpretations of the South African fossil record are mostly based on deposits from the Blauubank River Valley sites (about 50 km northwest of Johannesburg, in the UNESCO World Heritage Site known as the Cradle of Humankind), which are low-relief and geographically close. A recent study outside of Blauubank, however, has revealed significant biological heterogeneity in mammal groups as well as geologic and taphonomic processes, necessitating further excavation and investigation of novel deposits to help us interpret the South African fossil record more broadly.

Nearly a century of paleontological excavation into South African cave systems have allowed palaeontologists to construct a critical, baseline understanding of the fossil history of South African primates and other mammals. However, deposits within these caves are calcified into a natural concrete of sediments and fossils and it takes significant processing to recover identifiable specimens. Because of the time required to produce interpretable assemblages, past research has largely focused on the rich fossil deposits of the Blauubank River Valley sites (e.g. Sterkfontein, Swartkrans, and Kromdraai). While these sites have yielded important data they also lie very close to each other, were deposited over approximately the same period, and were sometimes sampled with methods that favoured only collecting primate specimens and teeth. As a result, and despite decades of analysis, we only have a limited (and potentially biased) understanding of the potential diversity of living and extinct mammal species on the landscape (palaeobiology), past environmental conditions (palaeoecology), and the cave and deposit formation processes (geology and taphonomy) (Adams, et. al. 2010).

Hoogland fossil site is a previously mined cave system 22.5 kilometres west of DITSONG: National Museum of Natural History (DNMNH) in the Schurveberg mountains near the Hennops River. Palaeontologist Robert Broom was amassed with a collection of fossils from this cave as well as other palaeocaves in the area including the Papio (Dinopithecus) ingens type specimen (SB 7) (fig. 1), a ‘Felis whitei’ mandible (TM 856(fig. 2); now assigned to Megantereon) and a ‘Felis whitei’ mandible (TM 856; now attributed to Megantereon) (Broom, 1936) (Turner, 1987) and the cultridens that make up the ‘Schurveberg’ in the DNMNH fossil collection. However, discoveries at Sterkfontein and subsequent participation in the additional locations in the Blaauwbank River Valley (e.g., Swartkrans and Kromdraai) and Broom’s return to the city look to have been put on hold indefinitely because of prospecting in the Schurveberg region. In 2008, our team from the DITSONG: National Museum of Natural History Palaeontology section, in collaboration with Dr Justin Adams from the Department of Anatomy and Developmental Biology at Monash Biomedicine Discovery Institute (Monash University), began the first in situ excavation and processing of ex-situ deposits from the Hoogland palaeocave, located in the Schurveberg). 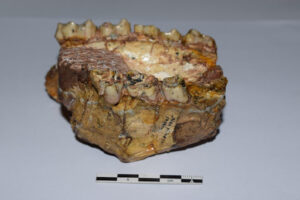 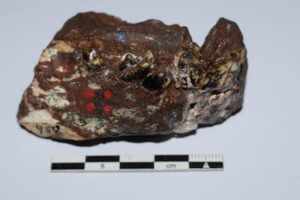 Given that Hoogland lies on the former Hausleitner property and Broom’s descriptions of the locality, Hoogland likely represents a source for at least some of the ‘Schurveberg collection’ fossils. This announcement provides a primary description of the geology and stratigraphy of the Hoogland cave system and preliminary data from palaeomagnetic, isotopic and macromammalian faunal analysis from ex situ sediments. The results of these analyses are then used to provide a provisional date for the deposits. 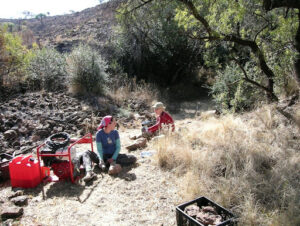 An active cave system and a sequence of palaeokarstic fossil-bearing strata uncovered during opencast speleothem mining can be found at the Hoogland site. Until recently, the only way into the active system would have been through a series of deep circular tunnels that ran across the slope above the fossil site. However, in the early twentieth century, opencast lime mining of the palaeokarstic deposit broke through into a vast chamber at the outer ends of this modern system. Following the open cavities, the lime miners removed any considerable amounts of speleothem. A relic of a comparable circular shaft may be found against the northern wall of the mined chamber, indicating the palaeocave’s deep vertical shape. The presence of speleothems at the base of the ancient shaft shows that it was deep, or that it had an upper cave that was not exposed to external circumstances that would cause more tufa-like deposits. Exogenous debris that fell down the shaft gathered at the bottom as a massive talus slope. This material was winnowed into a lateral cavern regularly, resulting in a sequence of interstratified siltstones, gravels, and flowstones. As a result, the Hoogland deposits formed with an inclined ‘layer cake-like strata, in contrast to many South African Plio-Pleistocene cave systems (e.g. Sterkfontein). 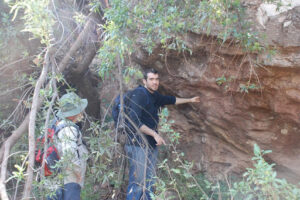 The HLP 580 is a primate tooth (Papionini indet), a lower canine complete unworn crown with the root broken just below the cementoenamel junction. Acinonyx sp. (HLP 383; left I3) and Hyaena sp. (HLP 1; left i2) (Adams, et. al., 2010) along with a canid terminal phalanx (HLP 2023) (Adams, et. al., 2010) are the only carnivore specimens that can be confidently identified below the Order level. In addition, the current Hoogland assemblage has three non-attributable partial carnivore tooth fragments (HLP 496, 638, 942) (Adams, et., 2010), a mandibular incisor (HLP 733) (Adams, et., 2010), and an isolated intermediate cuneiform (HLP 180) from a large-bodied felid or hyaenid. The Procaviidae are the largest single taxonomic group reported in the Hoogland collection thus far. The majority of the well-preserved skeletons belong to the now-extinct Procavia transvaalensis. 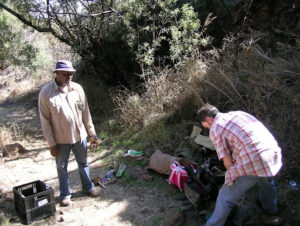 The team plans to return to the Hoogland fossil site in near future to continue excavating for fossils and also to try to understand the geology of the site as it is important in understanding the evolution of species, and the environment they were living in. All the fossils to be excavated will be housed at DITSONG: National Museum of Natural History, Palaeontology section as the repository of these fossils.