The year 2022 commemorates one hundred years of South African naval history. A small but significant part of this history is the connection between Prince Philip, the Duke of Edinburgh, who passed away in 2021 and the former W Class Destroyer, SAS Simon van der Stel. The ship was one of two W- Class anti-submarine destroyers purchased from the Royal Navy and taken into service during the 1950s. Before this, the ship served in the Second World War (1939 – 1945) under the name HMS Whelp and the Prince was a notable member of her crew at that time. He would later marry Princess Elizabeth, the future Queen Elizabeth II, in 1947. 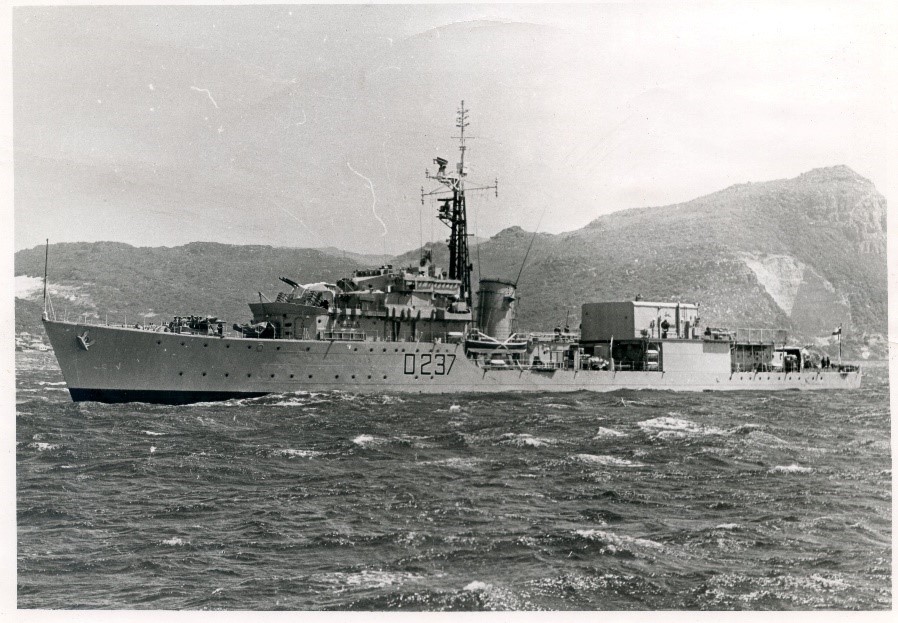 Prince Philip attested into the Royal Navy in 1939 and was commissioned as a midshipman in January 1940. Throughout the early part of the war until 1944 he served on the battleships HM ships Ramillies and Valiant and the destroyers HM ships Kent, Shropshire and Wallace. By 1944 he had attained the rank of Lieutenant-Commander and was appointed First Lieutenant of the newly designed W-Class destroyer HMS Whelp while she was being fitted out on the River Tyne post construction. In contrast to the short periods spent on board his previous ships, Philip would serve on Whelp for the remainder of the war.[1]

Whelp initially formed part of the 17th Destroyer Flotilla attached to the British Home Fleet. By then the invasion of Normandy (6 June 1944) had just taken place and there was very little action in the Atlantic and European waters. The Flotilla was therefore ordered to Ceylon (today Sri Lanka) in the Indian Ocean and attached to the British Pacific Fleet being made ready to assist the United States naval effort in the war in the Pacific against Japan. On route to the Pacific, Whelp took part in the naval action and air strikes carried out on the Sumatran oil refineries at Palembang from 24 to 29 January 1945.[2]

In an interview with the BBC aired in 1995, the Duke stated that Whelp arrived in the Pacific in March 1945 during the United States invasion of Iwo Jima. The ship formed part of the anti-submarine escort screen for the battleship HMS Duke of York which carried the flag of Admiral Sir Bruce Fraser, Commander-in-Chief of the British Pacific Fleet. Whelp was then attached to Task Force 57 which took part in the invasion of Okinawa from 1 April to 22 June 1945.[3] 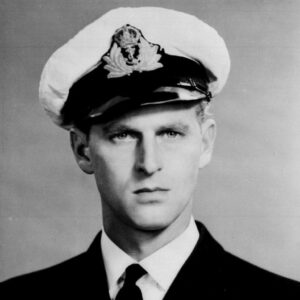 Prince Philip was a Royal Navy officer during the Second World War (httpswww.bbc.comnewsuk-10266717).

In September 1945 Whelp was assigned to the escort group of the United States battleship USS Missouri when it sailed into Sagami Bay near Tokyo. On 3 September the group moved into Tokyo Bay where the Japanese surrender was signed on Missouri on 6 September 1945. Prince Philip noted that Whelp was stationed some 200 yards (182 m) off of Missouri while the signing of the surrender was taking place. When asked what his duties were at the time of the surrender, the Prince answered that he was supervising the painting of the ship. Whelp later became involved in collecting boatloads of Allied prisoners of war (POWs) who were being held in Japan. The POWs, many of them emaciated and gaunt after long periods of captivity at the hands of the Japanese, were then ferried out to the Allied fleet carriers that were on station off the coast of Japan. Whelp eventually returned to the United Kingdom in January 1946 where she was placed in reserve. Prince Philip left the crew shortly after arriving in the United Kingdom and went on to serve on ships in the Mediterranean Fleet following his marriage to Princess Elizabeth. [4]

In 1947 Whelp and a sister ship HMS Wessex were transferred to the South Atlantic Reserve Fleet which was stationed at Simons Town in South Africa. It was there that both ships were acquired by the then South African Naval Forces (SANF) which underwent a name change to the South African Navy (SAN) in 1951. Wessex was commissioned into the SANF as SAS Jan van Riebeeck on 29 March 1950 while Whelp followed as SAS Simon van der Stel on 23 February 1953. Simon van der Stel had a somewhat chequered career in the SAN as she was commissioned and decommissioned three times during her nineteen-year service.[5] 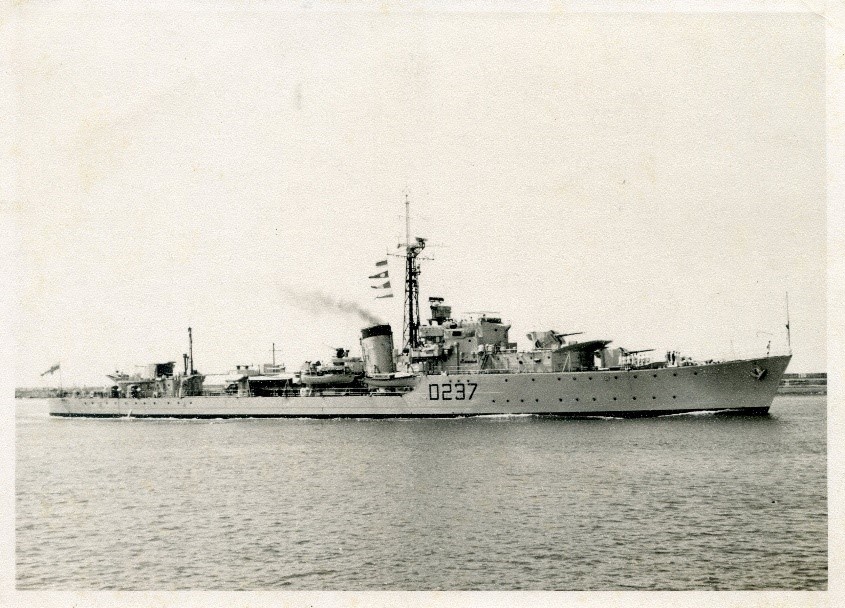 In 1954 the destroyer undertook a five-month cruise along the west coast of Africa to Europe visiting various ports along the route. She travelled some 31 000 km during the cruise and was the first South African ship to enter the ports of Rotterdam in the Netherlands, Derry in Ireland and Glasgow in Scotland. Later in 1957, the ship was de-commissioned and during this period both W-Class destroyers underwent conversion to fast, helicopter-carrying anti-submarine escorts.[6]

Simon van der Stel was re-commissioned on 27 February 1964 but was again de-commissioned just over a year later. On 17 June 1968 the ship was commissioned for a third time and, following a brief period as a component of the 10th Frigate Squadron, was assigned to an independent role as a training ship. She was decommissioned for the last time on 27 March 1972. Plans were drawn up to refit Simon van der Stel in 1975. However, following a thorough investigation into the condition of her hull, it was decided that a refit would not be economically viable and she was scrapped by Sandock Austral in 1976.[7]

Commemorating the connection between the Duke and the ship

During the 1995 BBC interview, the Duke of Edinburgh remarked that HMS Whelp stood out as his favourite ship during his wartime service. He firmly believes that was because his service aboard her was his longest on a single ship during his entire career in the Royal Navy.[8]

The connection between the Duke of Edinburgh and the ship was formally commemorated in 1994 during the visit of the SAN replenishment ship, SAS Drakensberg, to the United Kingdom. The Duke was invited to a function on board Drakensberg while she was at anchor on the River Thames in London. There Vice Admiral Robert Simpson-Andersen, Chief of the SAN at the time, took the opportunity to present to the Duke the main ship badge of HMS Whelp which had been removed in 1953 after she had been commissioned as SAS Simon van der Stel.[9] 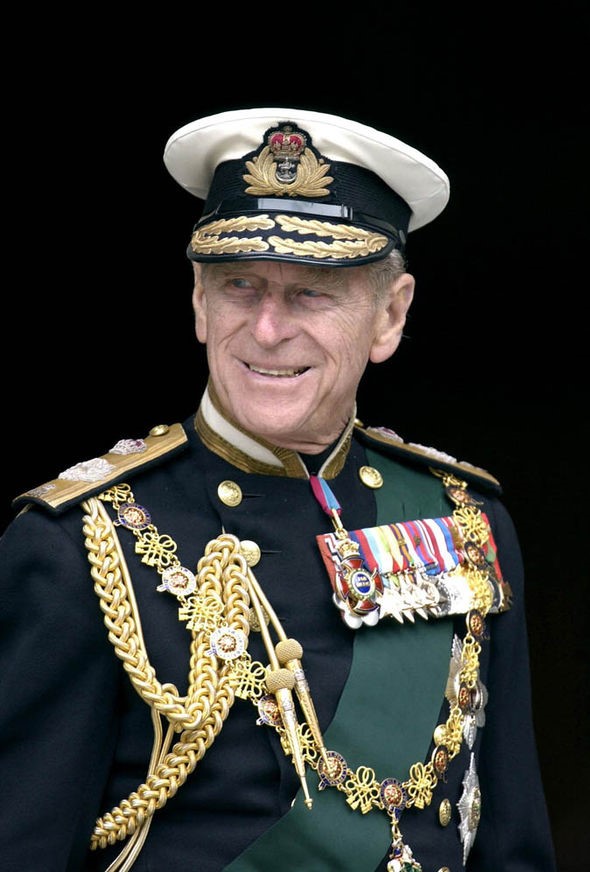 The Duke of Edinburgh dressed as an Admiral of the Fleet in the Royal Navy (Prince-Philip-Royal-Navy-war-hero-923605).

It is a traditional belief among maritime people that every ship has a unique personality and is not merely a heap of steel and machinery. One might argue that the unique personality of the ship in question was developed through her association with the Duke of Edinburgh, Prince Philip. The Duke himself established a unique connection with the South African Navy through his period of service on HMS Whelp, later to become SAS Simon van der Stel.