One woman who wanted to be a school teacher in 1950s South Africa would find herself in the late 1980s, the sole agent on the verge of breaking an international scandal. Billions of dollars were at stake, along with the reputation of the French arms trader, Thomson-CSF, who had been trading with Apartheid South Africa despite an arms embargo. On the verge of her breakthrough on 29 March 1988, Dulcie September was shot five times with a silenced rifle. Dulcie’s investigation died with her, and in 1999 South Africa’s young democracy entered into an arms deal with consequences that still plague the country. That arms deal was with Thomson-CSF, renamed Thales. Those responsible for Dulcie’s murder have never been brought to justice, but her family and friends have never stopped working to reopen the investigation. 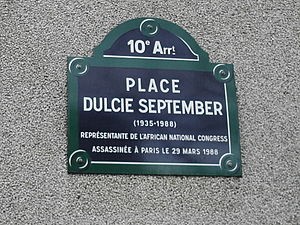 Dulcie Evonne September was born in 1935 in Athlone, Cape Town. From a challenging childhood, Dulcie learned to be a determined and hard-working person, and she applied herself well enough to attain her goal of becoming a school teacher in 1957. To help students forge solidarity across racial and cultural differences, Dulcie joined the Cape Peninsula Students’ Union (CPSU), an affiliate of the Non-European Unity Movement of South Africa (NEUM). Ever busy, Dulcie was also a member of the Teacher’s League of South Africa (TLSA). When the African People’s Democratic Union of Southern Africa (APDUSA) was formed in 1960, Dulcie joined them and was elected to their finance committee. Dulcie, among others, became increasingly disgruntled at the stultifying conflict that was prevalent between different union factions and, for this reason, became a member of an unofficial APDUSA group in Athlone who called themselves the Caucus. In the early 1960s, Apartheid security forces and the resistance movements quickly became more aggressive. Frustrated with the lack of progress in the unions, Dulcie joined this new wave of militant resistance, becoming a member of the Yu Chi Chan Club (YCCC). Yu Chi Chan is the Chinese wording for guerrilla warfare. In January 1963, the YCCC was replaced with the National Liberation Front (NLF). As a member of the NLF, Dulcie was associated with planning militant resistance to Apartheid and was arrested in October 1963 to be later charged with nine others under the Criminal Procedure Act. In 1964, Dulcie was sentenced to five years imprisonment, and she attempted to use that time to teach illiterate fellow inmates to read and write. For her efforts, Dulcie would be moved from her Cape Town prison to a prison in Kroonstad due to suspicions that she was negatively influencing illiterate prisoners.

Dulcie’s release from prison in April 1969 was followed by a five-year banning order which prohibited her from engaging in political activity and from returning to work as a school teacher. Seeing as political resistance against the Apartheid government was seldom done with government permission, it was only teaching in South Africa from which Dulcie was kept away. While under her ban, she secured a position at Madeley College in Staffordshire, England, and applied for a permanent departure permit from the South African government when her ban ended in 1973. Dulcie was introduced to African National Congress (ANC) politics soon after she arrived in Britain, where she found herself in the company of other South African political exiles from Cape Town, most of whom were with the ANC. Dulcie joined the Anti-Apartheid Movement (AAM) in London and participated in demonstrations at South Africa House in Trafalgar Square. Leaving teaching behind, Dulcie dedicated herself to Apartheid resistance by joining the International Defence and Aid Fund for Southern Africa (IDAF). She joined the ANC as a full-time staff member in 1976.

For the ANC, Dulcie worked in the ANC Women’s League and would find herself having to fight racial and gender discrimination at the same time. In the early 1980s, during her work in Lusaka, Zambia, Dulcie spoke harshly against sexism in the ANC and again in 1986 in an internal ANC report explaining the causes of a poorly organised protest event.

Dulcie was elected as the chairperson for the London ANC’s Women’s Section of the International Year of the Child (IYC) committee in 1979, and the ANC deployed her to their Lusaka Head Office, where she was elected at their first meeting as chairperson of their Regional Preparatory Committee (RPC), in 1981. The 1983 French elections saw a socialist government taking power which suggested the possibility of improved French cooperation with the ANC. It was late that year when Dulcie was chosen to move to Paris as the ANC’s Chief Representative in France, Switzerland, and Luxembourg. Her new appointment included a short military training course in the Soviet Union. France had already declared an arms embargo against South Africa in 1977, and the new socialist government might have created a window for Dulcie to encourage the proper enforcement of that embargo. Still, the lure of substantial profits for France through its arms dealers would prove too much to overcome. After the French arms embargo, sales of military products from France to South Africa increased in price by varying amounts, with some increases reaching as high as fifteen thousand per cent.[1]

Dulcie fought for sanctions and disinvestment campaigns to oppose Apartheid in all the regions of her responsibility. While the French government would not consent to Dulcie’s calls for full sanctions to be brought against South Africa, she did manage to strengthen ties with various anti-apartheid groups and with left-wing politicians in France, Switzerland, and Luxembourg. Dulcie was becoming an increasingly able threat against the Apartheid government and against the French arms traders and some of the French politicians who worked with them. In June 1986, Dulcie was involved in organising an international conference opposing Apartheid where ANC President Oliver Tambo made an opening address bringing up France’s moral obligations in the resistance to Apartheid. In 1987, a speech written by Dulcie mentioned that “in the sale of arms to the Pretoria regime, France is the second most important collaborator [after Israel]… This collaboration in the military and nuclear fields threatens peace in the African continent”.[2]

The last speech, which Dulcie had written, was presented on 17 March 1988, twelve days before her murder on 29 March. The address was a part of a demonstration on behalf of the Sharpeville Six, who had been sentenced to death. Dulcie’s words described the Apartheid government as surviving on international economic interests with governments, including France, refusing to stop collaborating and refusing to apply mandatory sanctions. Dulcie also referred to the 1956 women’s march against passing laws where they sang, “You strike a woman, you strike a rock”. Dulcie’s life was in immediate danger as she fought to help try and save the Sharpeville Six.

For years since her appointment in 1983, Dulcie had been harassed. She had been spied on while collecting evidence of clandestine arms deals, her counterpart ANC Chief Representative in Belgium had escaped two assassination attempts, and she worked without any real protection. On top of all this, the person who would likely replace Dulcie if anything happened to her was Solly Smith (aka Samuel Khanyile), who the South African Police Security branch had discretely recruited. Such a high-level ANC official had never been assassinated outside of Southern Africa. Still, the private investigation notes Dulcie had been taking revealed her to be on the cusp of exposing illicit arms dealing. They included specific details like the name of a ship, the Tinemaru, which had left Bordeaux, France, and had ended up docking in Durban, South Africa. Between 1983 and 1988, Dulcie reported on harassment and spying, detailing evidence that her telephone had been tapped and that she had spotted people photographing her and then quickly leaving when she noticed them. Her office had been broken into more than once, including one incident only a month before her death. Dulcie reported that since early 1984 a man named Jean-Paul Moreau had been acting suspiciously in her office and had repeatedly arranged interviews with her but kept cancelling them. In one of many suspicious phone calls to her apartment, Dulcie explained that, in an apparent phone tapping error, she heard a voice on the line answering a call with the greeting, “Thomson and Cie” (arms trader Thomson-CSF). One of the people who have been suspected over the years of killing Dulcie, Col Vic McPherson, told an interviewer, “You must understand that the French wanted to sell weapons; it meant billions of dollars for the French arms industry, but it was a state secret, and if this woman wants to expose this, it is better that she disappears”.[3] Around this time, it is believed that British Prime Minister Margaret Thatcher sent a message to the South African government has received information that South African military agents were planning something. The message warned of a strong reaction from the British government if any planned action was not cancelled.[4] The 1963 United Nations voluntary arms embargo against South Africa had led to a steep decline in British weapons sales to South Africa, and France seems to have filled some of the gaps.

Dulcie was 52 years old when she was murdered while collecting the mail as she arrived at work. News of her death brought twenty thousand people onto the streets of Paris, and hundreds of protesters demonstrated outside the South African Embassy and clashed with French police. Georges Marchais of the French Communist Party spoke against French cooperation with Apartheid South Africa and suggested French complicity in Dulcie’s murder. Nonetheless, an internal South African Intelligence memo from one year after Dulcie’s death described the relationship between South African and French intelligence agencies as “excellent” and mentioned a history of “close and friendly cooperation”.[5] 1988 protest in Paris in response to the murder of Dulcie September. The banner says, “Dulcie was our friend”. (Picture: Georges Merillon/Gamma-Rapho/Getty Images)

Today, schools, squares, and streets in France bear Dulcie’s name, and in England, the Staffordshire University Students’ Union renamed their boardroom the “September Room” in October 2011. Even in Amsterdam, The Netherlands, there is a road named Dulcie Septemberpad. In South Africa, in 2013, the Athlone Civic Centre has renamed the Dulcie September Civic Centre, and, in February 2022, the Dulcie September Civic Centre unveiled a mural of Dulcie. Dulcie’s niece and nephew, Nicola and Michael Arendse, unveiled the mural, which was commissioned by Enver Samuel, who directed the documentary, Murder in Paris. A respected South African street artist, Dbongz Mahlathi, created the mural. When you strike a woman, you strike a rock. Those who are responsible for Dulcie’s death or were complacent in Dulcie’s end still watch on as work continues to reopen her case. Using Apartheid’s description as a crime against humanity, there are recent prospects for reopening Dulcie’s murder case in France, although a statute of limitations has long passed. 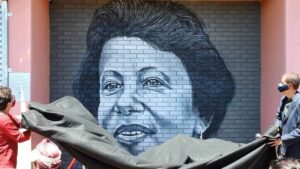