A scale model of the South African auxiliary minesweeping whaler, HMSAS Southern Barrier, is displayed at the DITSONG: National Museum of Military History (DNMMH). The significance of this model is that it represents a type of vessel used by the fledgling South African Navy during the Second World War (1939 – 1945). The naval part of our country’s Second World War history receives scant recognition compared to our land and air forces. This article is not meant to rectify this oversight. Instead, it attempts to provide insight into the role played by one of our country’s little ships.

Model of the HMSAS Southern Barrier (DNMMH Acq No 1613).

The model was hand built by Petty Officer S H Gray of the South African Naval Forces (SANF). It was donated to the Museum in 1945 by Cmdre F J Dean, Director-General of the SANF at the time. An oil painting of Gray and his model by war artist Gordon Taylor forms part of the Museum’s Official Second World War Art Collection. 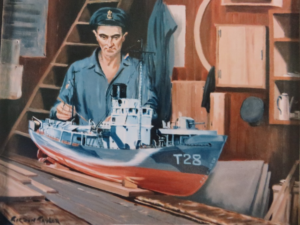 The prefix, HMSAS, stands for His Majesty’s South African Ship. All South African ships carried this prefix until 1952 when the letters ‘HM’ were dropped.

South Africa had taken steps to create a naval force in 1922 when the South African Naval Service consisting of a small hydrographical ship and two minesweeping trawlers, came into being as part of the Union Defence Forces. This service was short-lived as the Great Depression (1929 – 1933) and other factors led to its virtual demise in 1934.

The outbreak of war in September 1939 led to a second and more successful attempt to establish a fully-fledged navy. This was primarily a result of a memorandum produced in March of that year which laid down the procedures to be followed in the event of war to secure the nation’s ports and the traffic in and out of these harbours. It also made provision for equipping 36 trawlers and whalers as minesweepers and a further fifteen such ships as anti-submarine vessels.

On 15 January 1940, the South African Seaward Defence Force (SDF) was established and commenced duties concerning the coastal defence of the nation’s waters. Two years later, on 1 August 1942, the SDF amalgamated with the South African Division of the Royal Navy Volunteer Reserve to form the South African Naval Forces (SANF).

HMSAS Southern Barrier was originally one of six whale catchers produced in 1936 by the Bremer Vulkan Shipyard in Vegesack, Germany, for the Southern Whaling Company in South Africa. The other five class ships were the Southern Breeze, Southern Floe, Southern Isles, Southern Maid and Southern Sea. Each of these vessels was designed with a whale catcher’s characteristic high bow and low freeboard amidships. The superstructure was also spread more evenly across the length of the main deck.

When Italy entered the war on the side of the Axis powers in June 1940, the naval battle extended into the Mediterranean. The British Admiralty requested that South Africa provide four anti-submarine vessels for service in that theatre. The request was approved in November 1940, and all remaining Southern Class vessels except Southern Barrier were selected for this task. After being requisitioned for war service, Southern Breeze was sent to the Royal Navy while the other five were taken into the SDF.

Southern Barrier remained in South African waters, where she was fitted out as a minesweeper and selected as the lead ship of a six-vessel Mine Clearance Flotilla. This Flotilla was formed to provide a standard tactical naval unit ready to clear all minefields around the coast, except for those located near local ports, and to undertake any other special duty as required. Southern Barrier’s deployments eventually took her as far north as Kilindini in East Africa during her years of service.

Kleynhans writes that the Mine Clearance Flotilla became necessary after a magnetic minefield, laid by the German supply ship, Doggerbank, was discovered near Cape Agulhas in May 1940. The Flotilla was ordered to clear the area. The operation was only completed in March 1941 due to inclement weather in the area and the continued re-appearance of mines.

In November 1941, Southern Barrier and the Mine Clearance Flotilla played an essential part in Operation Bellringer, launched to intercept and confiscate ships of a Vichy French convoy en route from Madagascar to France. The Flotilla eventually sighted the convoy late on 1 November and shadowed the Vichy ships throughout the night while Southern Barrier made several unsuccessful attempts to communicate with her headquarters in Durban. Communications were only established at 05:30 the following morning, and eventually, the Royal Navy cruiser, HMS Devonshire, arrived at the station to escort the Vichy ships into the harbour. The Officer Commanding Southern Barrier, Lt Cdr R L V Shannon, also the Mine Clearance Flotilla senior officer, was later awarded the Order of the British Empire (OBE) in recognition of his leadership and control of the Flotilla throughout the operation.

Operation Volley was an attempt to intercept German blockade runners operating in South African waters. On this occasion, the Flotilla was divided into two divisions, with the Southern Barrier and HMSAS Terje operating southeast of Cape Agulhas. Southern Barrier led the Mine Clearance Flotilla on another combined operation in September 1942. At the same time, the remaining vessels of the Flotilla patrolled due south of Cape Agulhas. Both divisions met with severe stormy seas, with the areas of their respective patrols falling in the path of the Agulhas current. Eventually, Southern Barrier was forced to abandon the patrol and return to port on 21 October, having suffered considerable storm damage.

The remainder of the vessel’s war service was spent carrying out relatively mundane minesweeping duties along the South African coast. Southern Barrier finally entered the Alfred Basin in Cape Town Harbour for the last time shortly before the end of the war and was stripped of her minesweeping equipment in May 1946. A Norwegian whaling company purchased the vessel on 10 October 1946 for £25 000,00. 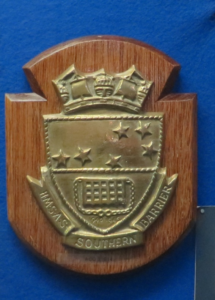 The specifications of the Southern Barrier were as follows:

The model of HMSAS Southern Barrier on display at the Museum is one of several model ships included in the collection to illustrate the development of the SANF during the Second World War. The experience gained by those who served on vessels such as Southern Barrier was significant for those who would go on to serve on the more purpose-built frigates, destroyers and mine countermeasures ships that were taken into service after the war as the South African Navy expanded during the 1950s and 1960s.