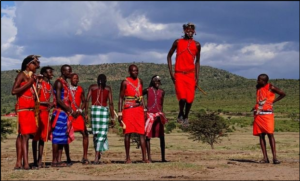 More than one million Maasai people live in a region on the east coast of Africa, which encompasses Central and Southern Kenya and Northern Tanzania. Their traditional Nilotic language is called Maa, but most of the Maasai speak English and Swahili. They are pastoralists and are sub-divided into twenty-two tribes, each with its dialect and customs (the Keekonyokie, Damat, Purko, Wuasinkishu, Siria, Laitayiok, Loitai, Kisonko, Matapato, Dalalekutuk, Loodokolani, Kaputiei, Moitanik, Ilkirasha, Samburu, Lchamus, Laikipia, Loitokitoki, Larusa, Salei, Sirinket, and Parakuyo). Some Maasai customs are related to the customs of people from territories north of their own region and south of Egypt. They have a fearsome reputation as warriors and cattle rustlers in their own region. Their primary combat weapon is the shield and spear, but they also use swords, throwing clubs, or bows and arrows. Maasai warriors would decorate their shields with information, including their age, rank, home village, lineage, and military accomplishments. They were known to accurately throw a club at a target up to one hundred meters away. In pitched battles, one Maasai tactic was for some warriors to throw clubs at the enemy in a high arc making their enemies look upwards. Then other Maasai warriors would throw spears in a lower arc to hit the distracted foe.

There was probably contact between the Maasai people and the Roman Empire, which conquered Egypt. The ancient Egyptians knew people south of their borders which they described as great archers, and the Egyptians would have known the Maasai. There is a theory that the customary red clothing of the Maasai is somehow related to the red uniforms of the Roman legions. Maasai clothing is dyed using the root of a gakaraku kairu or the stem of the chesalei plant. The Roman Empire used auxiliaries (foreign units) in their military, and some have even thought of the Maasai as a possible lost legion of the Roman Empire. The Maasai sword has also been said to have similarities to the miniature version of the Roman gladius.

Like most other people, it seems more likely that the Maasai adopted some customs and beliefs of people with whom they had contact throughout their history. Unlike the ancient Romans, the Maasai are also a Monotheist society. They believe in a god they call Engai, who has a binary nature of benevolence and vengefulness. The black Engai (Engai Narok) is benevolent, and the red Engai (Engai Na-nyokie) is vengeful. The red colouring of the traditional Maasai clothing represents bravery, strength, and blood. Unlike the Romans, the Maasai have always had an aversion to slavery. Slave traders of the 19th century knew to stay clear of them. If traders did need to pass through their territory, they would have to hand over large quantities of goods (mostly metals, often in the form of wire). The Maasai were a warrior culture and had little respect for men who worked as smiths. Therefore, they needed to acquire metals or even ready-made blades from the cultures around them—the Maasai men who worked as smiths would often shape the weapons of foreigners into Maasai patterns.

Regarding their choice of red coloured dye, it is believed among the Maasai that the colour red scares lions which can present a danger when living in huts in Africa. As far as the Maasai sword is concerned, it is only similar to the primary Roman weapon in that it is small and shaped to function as an axe when needed. The Maasai primarily relied on spears for combat and used their swords more as machetes for clearing brush, butchering cattle, or peeling fruit. The sword also symbolises a Maasai boy (layok) coming of age. Between the ages of fifteen and twenty-one, each Maasai boy will be initiated, given a sword, and thereafter be referred to as a man (moran). The rite-of-passage ceremony can also involve the killing of a lion.

Despite being pastoralists and believing that Engai put cattle on earth, especially for them, the Maasai have experienced a reduction in cattle numbers over past generations, largely due to rinderpest. As a result, they have begun eating more sorghum, rice, potatoes, and cabbage which they refer to as “goat leaves”. Their traditional food is still meat but also fresh or curdled milk, honey, tree bark, and cattle blood. They get the blood by cutting the jugular vein and mixing it with milk for the sake of rituals and healing the sick. The skins of slaughtered animals are used as bedding, and their dung is used to construct their small huts. 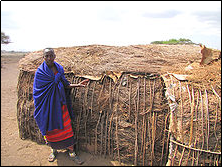 In Maasai tradition, only the greatest chiefs are afforded burials and funerals. For most of the traditional Maasai, burial is thought too harmful to the earth, and loved ones who have passed away are taken a distance from the huts and left on the ground for scavengers. There is very little ceremony involved.